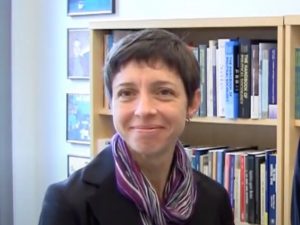 Part of the series “Viewpoints on Resilient and Equitable Responses to the Pandemic” from the Center for Urban and Regional Studies at The University of North Carolina at Chapel Hill.

The COVID-19 pandemic is causing people around the world to question how this virus will affect the many public and private systems that we all use. We hope this collection of viewpoints will elevate the visibility of creative state and local solutions to the underlying equity and resilience challenges that COVID-19 is highlighting and exacerbating. To do this we have asked experts at UNC to discuss effective and equitable responses to the pandemic on subjects ranging from low-wage hospitality work, retooling manufacturing processes, supply chain complications, housing, transportation, the environment, and food security, among others.

Layna Mosley is a professor in the department of political science at UNC-Chapel Hill. Her research focuses on the politics of government borrowing and debt, as well as on the relationship between worker rights and global supply chains. In this episode, she will discuss concerns about government debt around the world and options for debtor nations and their creditors.

The United States government has nearly 25 trillion dollars in debt, which is about 107 percent of U.S. GDP. That’s a lot, and U.S. debt has increased significantly since 2008. Many people worry about U.S. debt levels, in part because paying interest on debt means the government has less revenue to spend for other purposes.

But the U.S. is regarded as a very low risk country, and many investors and foreign central banks are – and remain – quite willing to lend to the U.S. government. The interest rates the U.S. pays are quite low, and the U.S. is able to borrow long term, meaning that most of its debts don’t come due for many, many years.

In low- and middle-income countries, the situation is much more worrying. In December 2019, the International Monetary Fund noted that more than 40 percent of low-income developing country governments were at a high risk of, or were already experiencing, debt distress.

What this means is that these governments may not be able to repay the debt they owe. Defaulting on debt can have catastrophic consequences for developing countries and their citizens, as well as for investors – Wall Street bankers, but also individuals whose retirement savings portfolios include bonds from developing countries.

But not defaulting on debt – continuing to make payments on what is owned – also can be painful for debtor countries. Once in a crisis, developing countries may need to impose economic austerity – reducing government spending on health care and education, for instance – in order to have the funds to keep repaying their obligations.

With the COVID-19 pandemic, the situation has become even more serious. Many governments of low- and middle-income countries find themselves with significant levels of debt. One recent estimate puts the stock of external debt of emerging markets and developing countries at $11 trillion.

This debt takes various forms – loans from private banks, bonds sold to foreign and domestic investors, loans from the Chinese government, and loans from international institutions like the World Bank.

And governments borrowed this money for various purposes, ranging from the creation of clean water systems and the building of new ports, to the improvement of education systems, to funding construction projects that might benefit their politically-connected friends and cronies.

These developing countries have nearly $4 trillion in debt payments due in 2020. When countries’ debt comes due, they often roll it over – that is, they borrow new money to replace the maturing old loans. But this, of course, assumes that lenders remain willing to replace old debt with new debt.

And this year, that may well not be the case. Many investors and lenders, who have been enthusiastic about developing countries during the last decade, have changed their views. The economic uncertainty associated with the pandemic leaves investors less willing to make higher-risk investments.

And these creditors also worry about whether low- and middle-income countries would be able to repay any new loans they were given. Lots of money flowed out of developing countries in the first few months of 2020 as the pandemic took hold.

Many of these countries, after all, are facing a perfect economic storm. For those that rely heavily on natural resource exports, the collapse in global commodity prices means lower revenues.

For those governments that have borrowed in foreign currencies, like South Africa, exchange rate collapses make it much more expensive to repay existing loans.

And for all governments, the pandemic has increased demands on the health care system, as well as for programs to help unemployed workers and ailing businesses.

It’s also worth noting that the downturn that comes with COVID-19 is a global one: some countries are hit harder than others, but every country has faced an economic hit, which means declining consumer demand and few places for low and middle income countries to sell the goods they produce. Many global supply chains ground to a near halt this spring, leaving developing country workers and businesses without markets to service.

So, many low- and middle-income countries may soon find themselves, or have already found themselves, in the very tough position of having to choose between honoring their legal obligations to their creditors and cutting other forms of spending to repay debt, versus defaulting on some or all their debt, in order to keep spending in other areas.

And when one or two developing countries defaults on debt, global markets might not take much notice. Argentina, for instance, is currently negotiating a debt restructuring with its creditors, and that’s become somewhat typical for Argentina.

But this is a potentially much bigger problem, one in which a significant number of countries may find themselves on the brink of default. And that could be damaging to the entire global financial system, and to the broader global economy. Financial globalization has many benefits, but it also can facilitate the spread of financial crises across borders.

Indeed, over 100 countries have already asked the International Monetary Fund for emergency financial assistance – through a rapid, but modest, financing program — to deal with the pandemic.

One possibility is debt relief, in which some or all debts are simply forgiven. But there’s very little support for this – lenders like to be repaid, and lenders also worry that this sets a bad precedent for future crisis.

There’s a third possibility: a standstill on debt repayments: that is, creditors could acknowledge that these are truly extraordinary times, and they could put a temporary stop to loan repayments. A standstill is a temporary pause: it doesn’t reduce or restructure the underlying debt. Rather, like a temporary relief from an individual’s home mortgage payments, it provides a bit of breathing room.

The Group of 20 governments, which includes the U.S. and many other major countries, has moved forward with a standstill, the Debt Service Suspension Initiative (DSSI). This initiative covers loans made by G-20 governments, and it would suspend payments through the end of 2020.

The standstill is a somewhat unique program, in that it is an offer of a blanket standstill – not a country by country process – for a set of countries. It doesn’t cover all countries: it applies to 76 low income countries, but not to many more middle income countries. And it only covers what’s known as bilateral official credit, that is, loans from one government to another government.

But so far, 22 of 77 eligible countries have requested this “forbearance” from their G-20 official creditors.

Yet, many more are suffering economically. Some governments are worried that, by requesting a standstill, they’ll send a negative signal to private capital markets. Countries like Benin, Rwanda and Pakistan have pointed out that their credit ratings might be downgraded if they ask to participate, and that this will make borrowing even more expensive in the future.

This suggest that private sector creditors – for instance, pension funds based in London or hedge funds based in New York – also should be part of the solution. These private sector creditors do not do a large amount of lending to the poorest of countries, but they are very important sources of credit for middle-income borrowers, countries like Brazil, Mexico, Turkey or South Africa.

This is too bad, not least because private creditors can be all too willing to lend money when times are good, overlooking economic and political risk when they’re hunting for higher returns.

“Inter-creditor equity” is the idea that all creditors are treated the same: a debtor in crisis doesn’t get to pick and choose. Inside the US, bankruptcy law preserves an “equality of creditors” principle. This makes it less likely that, when times turn bad, creditors will compete to be the first to get paid back. Bankruptcy procedures therefore allow an orderly resolution of crises.

The equivalent of bankruptcy proceedings do not exist for sovereign debt. That’s part of why debt restructurings often take a very long time. And governments often have been more willing to skip loan repayments to official creditors than to do so with debts to private creditors. This creates the possibility that debt relief from governments and international organizations would end up being used not to respond to economic upheaval and public health challenges in debtor countries, but rather would be used to make interest payments to private sector investors. And that is very much contrary to the purpose of a debt servicing standstill.

Getting buy-in from private creditors also would go a long way in preventing a broad debt crisis among developing countries. An orderly standstill would be a better outcome than a chaotic and rolling wave of defaults – and, while it would create a shock in global financial markets, it might allow a quicker return to normal.

Finally, there’s China. A big part of China’s foreign policy strategy during the last decade has been the financing of projects in a wide set of developing countries. One Belt, One Road brought Chinese finance to many corners of the globe.

Lots of governments were happy to borrow from China, because China didn’t impose the same sorts of conditions as the World Bank or the International Monetary Fund. Chinese lending often came with implicit political quid-pro-quos, and with higher interest rates, but it also provided much desired investment.

Last week, the United Nations stated that it prefers an across-the-board debt standstill for any developing country that requests one. The U.N. also called for action from private creditors. Yet, thus far, private creditors have shown themselves to be unwilling to act collectively and consistently. While this may come as little surprise to those who study the political economy of international finance, it nonetheless reminds us of the challenges related to sovereign debt in the time of a pandemic.

Editors’s Note: For an update on the DSSI, go to https://voxeu.org/article/sovereign-debt-standstills-update.