Light, Liberty and the Promotion of Black Art, History and Culture 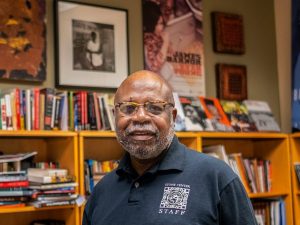 Joseph Jordan often reminds people that the Sonja Haynes Stone Center for Black Culture and History is much more than a building, that the programming inside is what makes it a vital part of Carolina’s identity.

“This, to me, is what’s much more gratifying than simply having a building – to know that you are helping to create new knowledge and that’s how you measure your worth,” Jordan said. “If all we said is that we’re a home for Black students, I think the Black students would be upset with us. What those Black students demanded now exists.”

What Jordan would never remind others of is that he worked with his staff to broaden the center’s mission and programming when he became its director in 2001, inaugurating a series of groundbreaking annual symposia that culminated in last year’s 1619 Collective Memory(ies) symposium. Although his scholarship encompasses the international, he has also focused on the hyperlocal in a Carolina career bookended by service on two commissions dealing with the University’s racist and Confederate past. This year, he took on the added responsibility of interim vice provost for academic and community engagement, leading 14 of the University’s wide range of centers and institutes.

For all these contributions and more, Jordan is one of six Carolina employees to receive the 2020 C. Knox Massey Distinguished Service Award.

“It is not often that a publicly engaged scholar so artfully manages the act of balancing between deepening the cultural awareness of campus through scholarship and administrative leadership while forging effective and enduring connections to local, national and global communities beyond its walls,” wrote Jennifer Gerz-Escandon, associate dean for interdisciplinary education and fellowship programs, in her nomination letter. “In so doing, he’s made the border separating campus and community increasingly permeable and unselfishly delivered unusual, meritorious and superior contributions to the University of North Carolina at Chapel Hill.”

Jordan traces his interest in Black culture to growing up in the 1960s and ’70s. “I came into adulthood during a moment when there was a lot of activism and renewed interest in the relationship between history, culture and public service. To be a young person at that time in history was very exciting. Learning was not limited to people who were in school.”

At the same time, the side of his family with roots in the Caribbean made him aware of the African diaspora’s reach. “I have always been led to the international,” he said.

Jordan grew up in New York and attended junior high through college (Norfolk State University) in Virginia. He went on to earn two master’s degrees at Ohio State University and a doctorate in African studies from Howard University in Washington, D.C. He was a senior research analyst at the Library of Congress and taught at Antioch and Xavier universities before becoming the director of the Auburn Avenue Research Library on African American Culture and History in Atlanta, Georgia, from 1998 to 2001.

When Jordan came to Carolina, he wanted to make the Stone Center a place “that reflected the demands of the educational enterprise in the 21st century — to use this vehicle to not only serve that mission of being supportive of Black students, faculty and staff  but also to support and educate all who are interested in this area of endeavor,” he said. “There’s nothing that limits the Stone Center from serving the entire campus and the community beyond.”

At the Stone Center, Jordan launched a series of annual groundbreaking symposia on often overlooked Black cultural icons like singer Nina Simone, actor Paul Robeson, philosopher Frantz Fanon and writer Amiri Baraka. Photo exhibits, films and theatrical performances that debuted at Carolina have gone on to national prominence. One symposium on Black and Puerto Rican radicals even inspired a reunion of the Young Lords, a former Puerto Rican street gang that became a force for social justice, and an annual forum on the group’s impact.

“We focus on events or people that have a connection to current issues or that may have been underrepresented in the literature,” Jordan said. “Once we’ve presented a symposium, someone has picked up the topic. We’re kind of proud of that.”

In 2019, the Stone Center hosted the day-long 1619 Collective Memory(ies) symposium, which drew special praise in his Massey nomination. “Four hundred years after enslaved Africans arrived in Jamestown, Jordan was inspired to honor the lives and ancestral history of those affected by slavery,” wrote a nominator. “As he has done so many times before, Jordan leveraged his national scholarly network and the gravitational pull of the Stone Center to create collective reflection and inclusive possibility for the Carolina community.”

Beyond the Stone Center

In addition to leading the Stone Center, Jordan is an adjunct associate professor of African, African American and Diaspora studies here and in study abroad. In his Massey citation, one student calls him “a gem of a professor,” while his nominator quotes another student who studied with him in Venezuela as saying, “I had three courses with him, and that experience changed my life and career path.” His nominator also praised him as a mentor who “makes himself available for sage advice and counsel.”

Off campus, Jordan works with the Historic Preservation Commission of Durham, as an advisory board member of Our Children’s Place and with the Stagville State Historic Site.

This leadership on campus and in the community recently led to Jordan’s selection as an interim vice provost and as one of the 15 members of the chancellor’s Commission on History, Race and a Way Forward.

“It’s interesting to see how the conversation has progressed since 2002, how it’s changed, how it’s evolved, and to see an entirely different set of people engaged in that conversation,” said Jordan, who served a similar role in 2002. “I remember there were people back at that time who had some very rock-solid attitudes and they’ve changed. Some of them have said to me that listening to the debates has helped them to understand why they needed to change their approach.”

Jordan’s Massey Award citation calls him “a publicly engaged scholar of national stature who steps over the campus’s stone walls to join academic thought with community-based knowledge.” Jordan, it reads, has epitomized the University’s motto of “Lux, Libertas,” which “shines light into shadows of ignorance and loosens the bonds of provincial thought to open minds and lead change.”

Jordan also cited the University motto in talking about his work with the history commission. “This allows the University to take a step back and look at itself with a new set of voices included in that conversation, voices that had formerly been excluded,” he said. “That will guide how the University defines itself for the public going forward and how it understands itself. It will make the University hew much closer to those ideals of ‘Lux, Libertas’ that it holds up as the ultimate objective.”