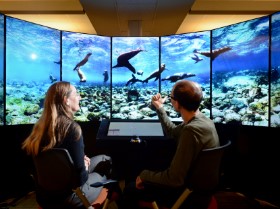 University of North Carolina at Chapel Hill students who want to visit the Great Barrier Reef, the Louvre or even the moon can now do so without leaving campus.

Thanks to a new Liquid Galaxy display system on the second floor of Davis Library at the University of North Carolina at Chapel Hill, visitors can call up any Google Earth destination in a surround-screen immersive environment.

The installation, made up of seven screens joined in a semi-circle, invites exploration with a high-resolution display and intuitive navigation. The library knows of no other Liquid Galaxy in North Carolina.

“From the moment the installer closed his tool box, students have been lining up non-stop to try the screens,” said Amanda Henley, one of the library’s two geographic information systems librarians.

Developers at Google created Liquid Galaxy in order to display Google Earth images and data linked to Google Earth, which is sometimes referred to as a virtual globe. The Google Earth library includes files such as maps, 360-degree building tours, geographic features, ocean data, street views, satellite images and images of the moon and Mars.

Henley is currently working to add digitized maps and images from UNC to the display in Davis Library. The collections include interactive maps that are part of the Library’s North Carolina Maps project and Driving Through Time: The Digital Blue Ridge Parkway. Both projects lay historic maps over current ones in order to demonstrate changes to the natural and built landscape.

While the Liquid Galaxy encourages play, Henley is in conversation with faculty members from several disciplines who see serious research possibilities in the 7-feet installation. These include geography professors who could map data such as housing patterns, disease spread or industrial activities over time. In the Department of City and Regional Planning, students routinely create scenarios using Google Earth. Wandering around and among their virtual creations will provide “a very different perspective,” says Henley.

For art history professor Glaire Anderson, the immersive display capacity may even improve upon some real-world experiences. Anderson has been experimenting with an ultra-high resolution panoramic photography process called Gigapan.

For one project, Anderson is researching a medieval aviation experiment that took place on a mountainside in present-day Spain. “Using Gigapan and Google Earth on the immersive display would be very helpful to my research group as we try to understand the landscape and topography that may have contributed to this early flight’s success,” says Anderson.

She also uses the Gigapan to document monuments around the world and works of art right on campus at UNC’s Ackland Art Museum. Showing these files on the Liquid Galaxy, she says, “might be the next best thing to seeing them in person”— sometimes even providing a unique opportunity for what she calls “close looking,” without obstacles such as tight schedules, poor access and crowds of tourists.

A Kenan Science Library Hub features a new makerspace and 3D printing facility, while the Hub at the Health Sciences Library focuses on health-intensive information needs such as grant support, data management and open access compliance.

A grand opening and open house for the Research Hub will take place in Davis Library on Oct. 23 from 3:30 to 5 p.m. The Liquid Galaxy will be open for demonstrations and test drives.

For Henley, the promise of the Liquid Galaxy lies in uses that she has not even thought of yet.

“I’m eager to see what people do with it,” she said. “The world is not flat. When people see what it really looks like, it sparks their imagination in all kinds of ways.”