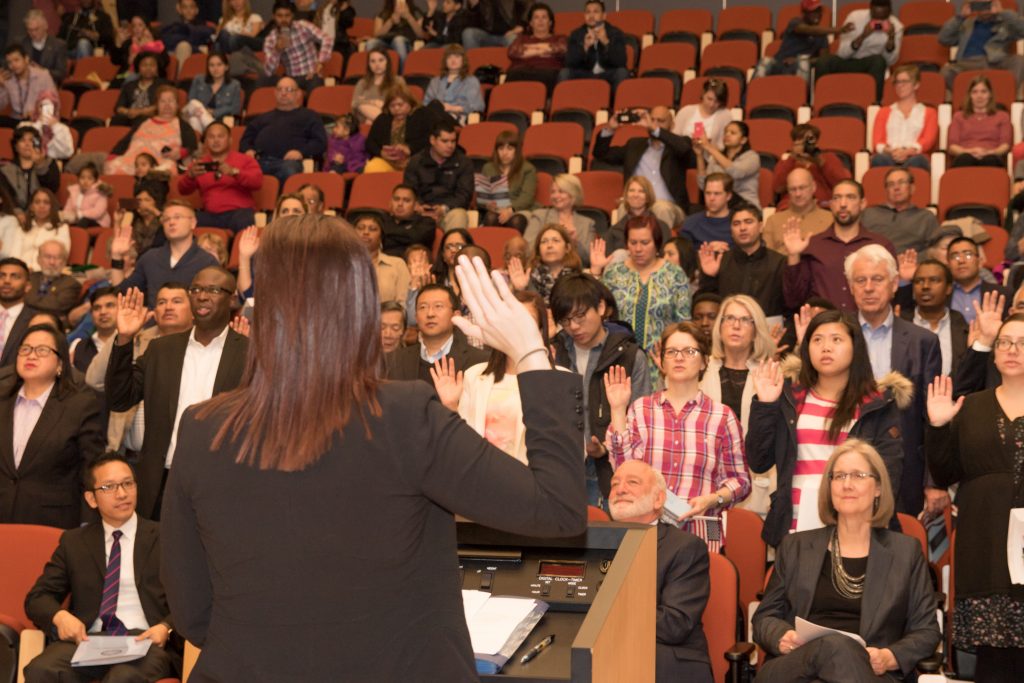 Fifty-seven North Carolina candidates for U.S. citizenship participated in a naturalization ceremony on Friday, March 24, 2017, at the FedEx Global Education Center at the University of North Carolina at Chapel Hill. The candidates represented 25 countries of origin.

UNC Global hosted the ceremony, the third to take place at UNC, at the FedEx Global Education Center in conjunction with U.S. Citizenship and Immigration Services (USCIS).

During the ceremony, Lisa Wohlrab, USCIS supervisory immigration services officer, administered the oath of allegiance. Afterward, Elizabeth Barnum, director of International Student and Scholar Services, called each candidate to the stage to receive their certificates of naturalization from Wohlrab, who was joined by Ron Strauss, chief international officer and executive vice provost.

Strauss gave the opening and closing remarks, expressing how important immigrants have been to this country and to the University. He also shared part of his story as a first-generation American who grew up in an immigrant household.

“Stories like ours show that the many paths people take to citizenship are numerous, but each person’s story is unique,” Strauss said. “We are united by our common love for the United States of America, our home.”

Two members of the Carolina community addressed the audience and spoke of their unique paths to citizenship. Thupten Norbu, interim director of the Carolina Asia Center, was born to Tibetan refugee parents in Sikkim, India. Because Tibet is not a legally recognized country, for many years Norbu identified himself as stateless on legal documents. He came to the United States in 2001 on a student visa and became a naturalized U.S. citizen twelve years later.

“Today, I am no longer stateless,” Norbu said. “I am an educated U.S citizen, who loves America and believes in the power of education to transform lives, contribute to the country and to make the world a better place. That’s why I am working at UNC, the first public university in the United States of America.”

Manuela Nivia ’17, a graduating UNC senior who became a naturalized citizen just a few months prior also gave remarks about her family’s history of immigration and her own path to becoming a U.S. citizen.

Nivia comes from a lineage of immigrants, tracing back to Munich in the 1930s, when her great-grandparents fled to Latin America to escape persecution under the Nazi regime. Nivia was born in Bogotá, Colombia, and she came to the U.S. with her parents in 2004. She says her 12-year path to citizenship was not a simple one.

“It was nevertheless made easier by the support of professors and friends at UNC, who encouraged me through the application process, the citizenship exam and the interview, and who celebrated with me after my ceremony,” she said.

A handful of the newly naturalized citizens had ties to the University. Marie Gorman, an Australian immigrant who became a naturalized U.S. citizen at the March 24 ceremony, has been a nurse at UNC Hospitals for 15 years and has taken classes at UNC. She said the fact that the ceremony was on UNC’s campus made it even more meaningful to her.

“In this time, a lot of immigrants don’t find themselves to be very welcome, and I thought this ceremony was very welcoming to everybody,” Gorman said. Like many immigrants to the United States, she is proud of her new citizenship, but her heritage will always play a significant role in her evolving identity. “I was born and grew up in Australia, and even though this is my home now, part of you will always be where you’re from.”

After the ceremony, Nivia reflected on the honor of being able to address people whose position she was in just a short time ago.

“It meant a lot to have the opportunity to welcome the citizenship candidates as fellow Americans,” she said. “Immigrants devote great efforts to reach such a momentous occasion, so it was an honor to celebrate individuals of such courage and determination.”