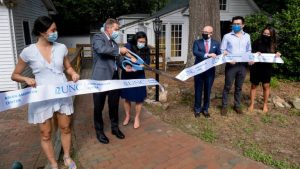 The UNC Asian American Center celebrates the opening of its physical location with a ribbon-cutting event and look inside the center. (Jon Gardiner/UNC-Chapel Hill)

The center, led by Heidi Kim of the department of English and comparative literature, gives students, faculty and staff of Asian descent a place to call their own.

When she was growing up, Selina Shi threw away the Chinese tea eggs her grandmother made for her every day for lunch because a classmate once told her “they smelled weird and looked disgusting.”

Being in the minority often means hiding parts of your heritage from others, Shi told the audience at the Aug. 26 ribbon-cutting ceremony to open Carolina’s new Asian American Center at 215 W. Cameron Ave.

“This center means something different for each student. For me, it’s a place where I can be myself — where I know that every aspect of my identity is accepted and celebrated,” said Shi, a junior Morehead-Cain Scholar and current director of the center’s fundraising campaign.

The creation of the center during the COVID-19 pandemic and a surge in violence against Asian Americans was particularly profound timing, said the center’s director Heidi Kim, associate professor in the English and comparative literature department in the College of Arts & Sciences.

“I can’t think of a year in history that more clearly demonstrated the need for an Asian American Center that is devoted to supporting the Asian American community and educating our students and our state on the complex and diverse history of Asian America, with all of its painful and glorious moments,” Kim said to the small in-person audience of mostly donors and supporters as well as those watching the livestream provided to the public because of COVID-19 restrictions.

In his remarks, Chancellor Kevin M. Guskiewicz recalled making dumplings with donor Barb Lee, former chair of the Board of Visitors, at an early fundraiser for the center, and called the trustees’ vote to establish the center one of the highlights of his administration.

“There is still much work to be done as we build our community together, as trustee Davis has already indicated,” he said. “But today is really about celebrating important work of building diversity here on our campus.”

Birthed virtually in September 2020, nine months after being approved by the Board of Trustees in January 2020, the Asian American Center came to be both sooner and later than might be expected. Sooner, because the launch occurred amid the University’s virtual pivot due to the COVID-19 pandemic. Later, because the University’s largest ethnic minority — currently 17% of the student body — have been talking about a center of their own since the 1980s.

“It’s actually unbelievable — to have a home and a living room for Asian Americans on campus,” said Eugene Lao ’91, who co-founded the Asian Students Association more than 30 years ago and donated the first gift to the new center. A native of Greenville now living in California, he returned to Carolina to attend the outdoor ceremony in person.

After the cutting of the white ribbon imprinted with the center’s logo, guests were invited to tour the center in small, related groups. The carriage house, built in the mid-1800s, sits in the back of a shady lot at the corner of Cameron Avenue and Wilson Street. Its hardwood floors have been refinished, its walls repainted and its space reimagined as a central gathering space, an office and a small breakroom. Visitors used colored markers to add their own important dates to a printed timeline on display in the main room.

The participatory display echoed the thoughts Kim had shared with the audience about the momentous day. “I hope that today will not only be a defining moment in the history of the University, but in your life of community engagement. And because of your help, I believe that future generations who participate in the Asian American Center will find the education and support and the self-confidence to fly where they want to fly.”