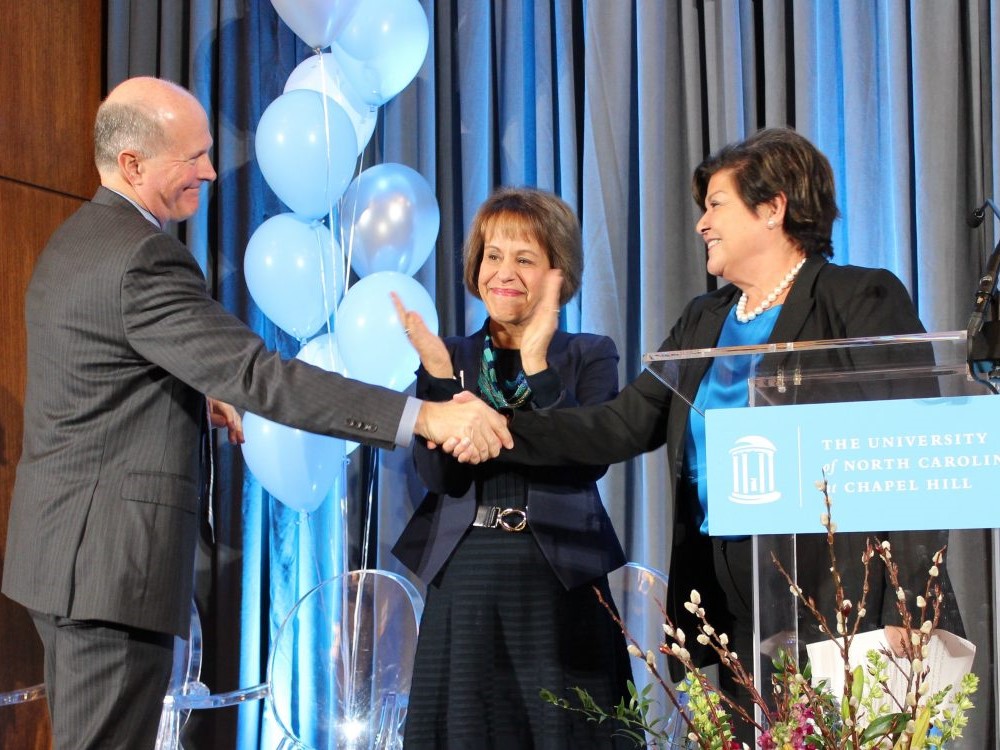 After more than 13 years at the University of Miami, Nena Peragallo Montano said the choice to leave her longtime home was a difficult one. But as she spoke to the welcoming audience at the Carolina Club on Feb. 9, she expressed enthusiasm and gratitude to call the University of North Carolina at Chapel Hill her new home as the dean of the School of Nursing.

“I would not have left Miami for just any position,” Peragallo Montano said. “It took something as unique and exciting as the opportunity to lead the School of Nursing at this world-class university on this beautiful campus to lure me away.”

In her remarks introducing Peragallo Montano, Chancellor Carol L. Folt highlighted what makes the job at UNC so unique. “The dedication to research as a fundamental part of what you do is not always found in every nursing school. That’s a real feature of excellence here,” Folt said. “A real belief to work as a community with the other schools of healthcare at this University. This is a biomedical juggernaut.”

The University announced the selection of Peragallo Montano in August, but she started the job last month, replacing Donna S. Havens, who had served as interim nursing dean since 2014. At Miami, Peragallo Montano was the dean and professor for the School of Nursing and Health Studies, a professor on the graduate faculty at Pontificia Universidad Católica de Chile School of Nursing and an adjunct professor at Australian Catholic University in North Sydney.

Peragallo Montano is recognized nationally and internationally for her research in health disparities and culturally competent interventions with minority populations. She was born in Chile and received her bachelor’s degree there before immigrating to the United States with her family. She earned a Master of Science in nursing from the University of West Virginia and a doctorate in public health from the University of Texas.

Executive Vice Chancellor and Provost James W. Dean Jr. observed that the University not so long ago welcomed Fouad Abd-El-Khalick, a native of Lebanon, as the new dean of the School of Education.

In her remarks, Peragallo Montano spoke of the school’s duty to meet the need not only for nurses but also for nursing faculty to train future nurses. She also wants to take the school, recently ranked ninth overall and second among public universities by Nursing Times magazine, to the very top of the rankings.

“We have a lot of work to do and a lot of good to do together,” she said. “Thank you for bringing me here.”