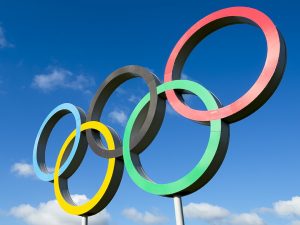 In 1979, Sue Walsh swam the fastest 100-meter backstroke in the world. Today, Walsh is the Ram’s Club Associate Executive Director of Scholarship and Legacy Gifts. Back then she graduated high school a year early to train for the 1980 Olympics, but her dreams were dashed when the U.S. boycotted the games.

When Walsh and Shelton heard that the 2020 Olympic Games had been postponed until 2021, each recalled her own disappointment four decades earlier and wondered how current student-athletes would be affected.

“It was a similar situation to what athletes faced this spring: We all kept training anyway because no one knew for sure if we would be competing in the Olympics,” said Walsh.

Carolina student-athletes who qualified to compete in trials to make the 2020 Olympic team now must wait a year to prove themselves worthy of the Olympic stage. The Olympic trials are only held every four years, mere months before the games, and athletes have a narrow window of time to hit qualifying marks to receive an invitation to compete in the trials. When news came that the 2020 Olympics would be postponed to 2021, it was a shock to the student-athletes but not unprecedented in history.

“This isn’t the first time the Olympics have been moved; in fact, the 1940 Olympic Games in Tokyo were cancelled by the Japanese military because they had just started fighting a war in China,” said Matthew Andrews, teaching assistant professor in the history department. “The 1916 and 1944 Games were both cancelled because of WWI and WWII. Also, in 1980 the U.S., along with 65 other countries, boycotted the Olympic Games because they were held in Moscow, and the Soviet Union had just invaded Afghanistan.”

Andrews is currently teaching the course “The Olympic Games: A Global History” and has been discussing the postponement and the consequences with his class.

“Since there were no Olympic Games from 1936 to 1948, there was an entire generation of athletes who never got to compete on that world stage,” he said. “There will inevitably be some athletes left behind by this postponement as well.”

When the U.S. National Olympic Committee announced that the team would boycott the Moscow Olympics, Walsh took the news in stride and instead looked forward to 1984.

“At that time, I had no idea how missing the 1980 Olympics would affect my career. I was only 17, so I assumed my peak was still ahead of me and chose to look towards the 1984 Olympics,” she said. “I went to the Olympic trials in 1984 but narrowly missed making the team by a hundredth of a second. Between the 1980 and 1984 Olympics, the International Olympic Committee decreased the number of swimmers allowed to compete in each event from three to two, and I placed third in the trials.”

Though Walsh never competed in the Olympics, the 1984 UNC-Chapel Hill graduate is arguably the greatest swimmer in University history. During her four years at Carolina, Walsh held records for the 50-yard, 100-yard and 200-yard backstroke races and won Atlantic Coast Conference Swimmer of the Year three times.

Shelton, who has coached 13 Carolina field-hockey players to an Olympic team, still vividly remembers how it felt to make the 1980 Olympic team but not get to compete.

“1980 was the first year that women’s field hockey was included in the Olympic Games, and I was selected for that first team,” she said. “Men’s field hockey had been part of the Olympics since 1908, so we were looking forward to finally being included.”

Despite any disappointment, Shelton trusted that boycotting the 1980 Olympic Games was in her and the country’s best interest.

“When the president at that time, Jimmy Carter, announced that the U.S. would boycott the Moscow Olympics, I trusted that the government knew more about the Soviet occupation of Afghanistan than I did, and I felt that going along with the boycott was a patriotic act and something I could do in service to the country,” she said.

In recognition of the athletes’ sacrifice, the U.S. government found other ways to honor the 1980 Olympic team.

“Everyone who made the team in 1980 traveled across the country doing exhibition competitions for the public, and later we all went to Washington, D.C., for a parade down the National Mall and a luncheon on the White House Lawn,” said Shelton. “During that trip, every Olympian received the Congressional Medal of Honor for participating in the boycott.”

Shelton went on to make the 1984 Olympic team and won a bronze medal with her team in Los Angeles, and she hopes that the student-athletes affected by this year’s postponement still get their chance to compete in Tokyo in 2021.

“There’s no feeling quite like competing at that level, representing your country to the world,” she said. “That’s what I want for all our Carolina athletes.”

Jill Shippee, a junior thrower on the University’s track and field team, almost didn’t believe that her Olympic trials would be postponed.

“Throughout February and early March I still thought the Olympics would go on as planned, because I couldn’t imagine that they would cancel such an important worldwide competition,” she said. “When I got a survey from the group that organizes our Olympic trials about how my training was affected by the COVID-19 pandemic, it made me realize that they were seriously considering postponing the Olympics.”

Unlike most student-athletes, Shippee benefits from the postponement.

“This was my first year qualifying for Olympic trials, but I suffered an injury earlier in the season so the postponement to 2021 actually gives me a chance to fully recover,” she said. “The peak age for track and field throwers is fairly late for an athlete, around 35 to 38, so I feel like I’ll have more chances in the future to try and make the Olympic team.”

In the meantime, Shippee is still training and building back her strength.

“I’ve been throwing in my parents’ backyard. Thankfully, for hammer throw, as long as you have a concrete slab and a patch of grass you can practice.”

Sophomore Grace Countie of Carolina’s swimming and diving team is now looking to 2021 for her second chance at making the Olympic team.

“I previously qualified for Olympic trials in 2016, so I have experienced the thrill of swimming with the world’s best,” she said. “I think previously competing in Olympic trials made me less nervous this time around, but with the postponement I’m now focusing on how to train for 2021 instead.”

While Countie tries to train for 2021, she faces a particular challenge during the COVID-19 pandemic as a member of the swimming and diving team.

“Because of the COVID-19-related closures, I don’t have access to a pool or training facility, so I’ve been doing cardio and strength-building exercises from home,” said Countie. “While we can’t be in the water, our team is working on the mental side of training and what makes our sport special.”

Redshirt sophomore Madison Wiltrout has a new perspective on her 2020 outdoor season throwing the javelin for the University’s track and field team.

“Preparing for the Olympic trials was my goal this season, so the postponement not only affected my physical training but also my mental preparation,” she said. “The postponement has completely changed how I think about my performance this year and how I’m looking at the future.”

On Friday, April 24, Walsh and Shelton sat down with Olympic hopefuls Shippee and Countie to discuss their collective reactions to the postponement of 2020 Tokyo, what it takes to be an Olympian and how the student-athletes can stay mentally strong while training for an additional year.

At the end of their discussion, Walsh had comforting words for not only Carolina athletes but for all Olympic team members and hopefuls who are now cautiously waiting for 2021 to find out if they will get to fulfill their Olympic dreams.

“Whether you have the chance to compete or not, if you make a U.S. Olympic team you should give yourself a gold medal because that means you’re one of the best athletes in the world.”

Click below to watch Shelton and Walsh’s full conversation with Shippee and Countie.