Home / News Stories / Out of Sight, Out of Mind

Out of Sight, Out of Mind 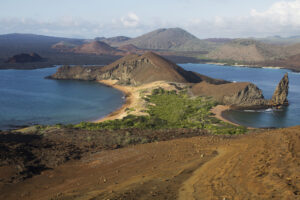 Bartolomé Island is one of the most frequently visited sites in the Galápagos archipelago. (Megan May)

About 71 percent of Earth is water. Of that water, 96.5 percent is oceans. So why do most air pollution and emissions studies focus on terrestrial research? An interdisciplinary team of UNC researchers has combined their expertise to determine how much marine-source emissions impact human health and the earth.

What comes to mind when you think of air pollution? Long lines of cars pumping out grisly, grey exhaust? Dark plumes of smoke from a manufacturing facility? What about the trees in your neighborhood park, or the pristine blue waters surrounding the Galápagos Islands?

Scientists have been developing air quality models to measure pollution since the 1970s. Most have focused on the human sources of air pollutants, which has led to an oversight of natural emissions from plants and, especially, trees.

Through normal biological processes, trees produce massive amounts of volatile organic compounds like isoprene, a highly reactive chemical that, up until recently, scientists believed had no contribution to the creation of aerosols that impact climate and public health. Now, scientists understand that on land, when isoprene interacts with acidic chemicals in the air, it does just that. The question is: Does the same thing happen in the air over marine environments?

Researchers from the UNC Center for Galápagos Studies strive to find the answer.

Searching below the surface

Phytoplankton are single-celled microalgae that collectively produce 50 percent of the oxygen we breathe. They also play an important role as the beginning of the ocean’s food chain, providing vital nutrients to larger animals like zooplankton, small fish, shrimp, and tuna.

Adrian Marchetti is a marine scientist whose research involves hands-on data collection in the pristine natural laboratory that is the Galápagos Archipelago. There, he and his team measures various environmental factors, such as water temperature, salinity, and nutrient levels, that influence the production of phytoplankton.

He believes the disconnect between most people and the ocean comes from an out-of-sight, out-of-mind mentality that is ultimately inhibiting our understanding of climate change, especially when it comes to global emissions.

One summer, while teaching study abroad courses at the Galápagos Science Center — a collaboration between UNC and the Universidad San Francisco de Quito in San Cristobal — Marchetti met Will Vizuete, a UNC atmospheric chemist interested in the environmental and health impacts of air pollutants. Vizuete realized that Marchetti’s phytoplankton research could help determine if the ocean is also a source of harmful aerosols that contribute to global warming. They just needed to add isoprene to their data collection.