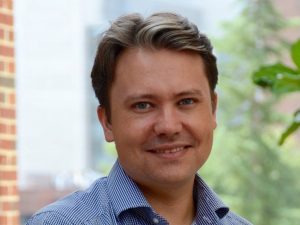 Over the last several decades in China, millions of rural residents have migrated to urban areas for work. As parents migrate, they’ve left their young children behind with other family members in the countryside.

A new study co-led by Sean Y. Sylvia, assistant professor of health policy and management at UNC’s Gillings School of Global Public Health and faculty fellow at the Carolina Population Center, evaluates the effects of maternal migration on early childhood development outcomes. The results, published online March 12 by Demography, found that mothers leaving before children reach 30 months of age may cause delayed cognitive development and lower nutritional status for children in rural China.

“This rural-urban migration is a key process that helps to drive economic growth,” says Sylvia. “Our findings suggest that when there are policies or other barriers that prevent families from staying together during the migration process, there are not only immediate costs due to separation but also potentially substantial longer-term costs due to children not reaching their potential.”

As of 2010, there were approximately 61 million “left-behind” children in China, 11.7 million of whom were under the age of two. After their mothers migrated, children spent less time in stimulating activities and were more likely to have reduced dietary quality. Sylvia and team found an 8.2 percentage point increase in the probability of cognitive delay among children whose mothers moved away.

“We were surprised by the size of the effects that we found,” Sylvia says. “The negative effect on cognitive development that occurs when a mother migrates while her child is in the first year is close to the size of the benefits we found in another study looking at the impacts of a relatively intensive early childhood program.”

The takeaway for policymakers in China? The migration that has fueled its economic growth may have come with a cost in human capital for the next generation. Investments must be made in early childhood programs in rural communities throughout China.

“Poor development in early childhood is widespread throughout rural China,” says Sylvia. “Investments are needed for all children.”

Sylvia is a health and developmental economist who has conducted multiple large scale studies of early childhood development in China’s rural areas and migrant communities, as well as numerous studies of health, nutrition and learning among children at older ages. Fluent in Mandarin, he has had long-standing collaborations with a number of universities in China and has published multiple articles on early childhood and human capital in the country.

In a different paper published online January 19 by the Journal of the European Economic Association, Sylvia and colleagues from Stanford University, Peking University and University College London ran a large field experiment across 170 schools in western China to see if monetary rewards could improve the impact of anemia reduction programs.

About 25% of children in poor areas of China are anemic, meaning they lack enough healthy red blood cells to transport adequate oxygen throughout their bodies. (The condition leads to weakness and lethargy.) In the study, Sylvia and his colleagues paid school principals based on how many children they brought out of anemia during the school year. A comparison group was given the same information about anemia reduction, but not paid for their efforts. The researchers also gave schools grant funding to implement the programs that would reduce anemia.