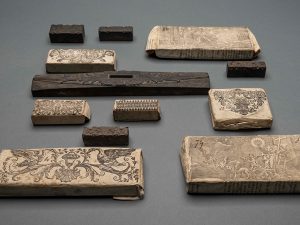 Some of the 900 woodcut printing blocks from the Propaganda Fide press, dating from 1625 to 1850. (Image courtesy of University Libraries)

The University Libraries’ 9 millionth “volume” — a collection of 900 woodcut blocks — has many stories to tell.

The 9 millionth volume recently acquired by the University Libraries at Carolina isn’t a book. It’s a collection of approximately 900 woodcut printing blocks from the Propaganda Fide press, dating from 1625 to 1850. The blocks’ role as printing technology, and in global history, makes them valuable to research in many fields, and also a tribute to books and bookmaking.

The Sacra Congregatio de Propaganda Fide (“Sacred Congregation for the Propagation of the Faith”) is a college of the Catholic church, now known as the Congregation for the Evangelization of Peoples. To aid in the church’s mission to spread the faith throughout the world, it established its own press in 1622. The press produced materials in various languages, including guides for priests trying to learn a new language and publications that communicated Catholicism’s tenets.

The collection contains blocks in many languages, with a heavy concentration in East Asian and Middle Eastern languages, Slavic, Greek and other global languages.

Elizabeth Ott, Frank Borden Hanes Curator of Rare Books at the Wilson Special Collections Library, said she expects these objects to benefit many scholars. “From an art historical perspective, they have a lot of value. If you’re studying iconography in books, if you’re studying the production of images, if you just want to know how woodcuts were used to produce illustrations or art prints, you can find out from these objects,” she said.

“It’s also a collection of great value to people who are studying how religion has been taught and disseminated,” said Ott. “Religious conversion was a major driving force for the study of languages in Europe. European knowledge of other cultures was made possible, in part, by the production of religious texts in various languages.”

The blocks were purchased with funding from the John Wesley and Anna Hodgin Hanes Foundation and the Whittaker Library Foundation. The Hanes family’s commitment to Carolina’s libraries began in 1929, when it gave the gift that first established the Rare Book Collection. Through its foundation, it has since given every milestone millionth volume to the Library. Officials believe the tradition is unique among research libraries.

The Whitaker Library Fund, established in 1960, has helped to extend the University Libraries’ holdings of English and American literature, as well as continental European books and manuscripts.

“The millionth volume tradition is not just about celebrating the Library,” said María R. Estorino, associate University librarian for special collections and director of Wilson Library. “It is about our commitment to making the creation and transmission of knowledge in so many forms accessible to the residents of North Carolina. That this commitment is shared by the Hanes and Whitaker families demonstrates the power and impact of philanthropic partnerships.”

Read more on The Well.