Home / News Stories / Rachel Hotong ’21 Shares on Being a Transfer Student, a Student Abroad and Now a Student During COVID

Rachel Hotong ’21 Shares on Being a Transfer Student, a Student Abroad and Now a Student During COVID 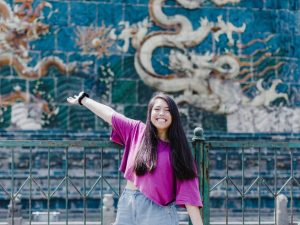 Rachel Hotong, visiting the largest and oldest Nine-Dragon wall which was once believed to protect the local palace.

DAMES students are made of strong stuff. Studying the incredible languages and cultures in our department takes time, dedication, and boundless enthusiasm, and Rachel Hotong, a senior double major in journalism and Chinese, has been doing just that as changes sweep across the world from COVID-19.

I interviewed Rachel to see what it’s like to be a student both in DAMES and at Carolina right now, and here’s what she told me:

First, tell me about you! How did you end up here at UNC in DAMES, and why did you choose to study Chinese with us?
I was born and raised in Chapel Hill! Tar Heel born, Tar Heel bred! But I think it’s important for you to know the context of me. My dad is third-generation Chinese and also South African, and my mom is Afrikaans. They met in South Africa and immigrated here. My mom was the typical Tiger Mom despite being blonde and blue-eyed, and she enrolled me into the dual language Chinese program at Glenwood Elementary locally.

I hated it. I hated being different. I just wanted to be a normal kid! In 5th grade, I took a trip to China for the first time, was violently ill the whole time, and hated it too. I stuck with Chinese up through high school because I felt like it was my only option.

Then I went to Malaysia in late high school, where I was able to use my Chinese to talk to people there. Being able to communicate with them made me really fall in love with Chinese… I’ve learned that I love knowing Chinese so I can make people culturally comfortable, rather than making people assimilate to English.

I didn’t start my college career at UNC, actually. I went to Wheaton College near Chicago first because a Chinese professor from there visited my high school and really impressed me. I helped get Chinese established as a major there, then ultimately transferred here to UNC.

My appreciation for Chinese continues here. Each character is like a snowflake! It’s beautiful just looking at it by itself, but if you looked at it under a microscope, you’d see how it’s even more beautiful and intricate because it’s comprised of so many unique pieces. I just love it.

You went to Malaysia in high school, which is super cool! You studied abroad while here at UNC too, right?
I did the CET Beijing language intensive program during the summer of 2019. They don’t lie when they say it’s intense!

It was probably my favorite summer of my life. I made some of my closest friends there. A year and a half later, we’re still keeping in contact. You know how if you go through something hard with someone, you just bond? We all bonded through working toward the same niche goal together.

Studying abroad in Beijing was instrumental to my Chinese proficiency, knowing Chinese culture, and learning more about the everyday life of living in China. It stuck with me! I went to visit a friend in Spain after the CET program. I arrived earlier than her, and I don’t speak Spanish, but our AirBNB happened to be in a Chinese neighborhood, and I found out I could speak with the locals there! My proficiency was that good!

Studying abroad was one of the best experiences ever. I can’t recommend it enough. (Rachel: The Great Wall with some great friends I met while studying at CET Beijing.)

Do you have a favorite class here at home in DAMES?
Business in Chinese! Because of that class I now have a resume and cover letter in Chinese, which is awesome.

You’ve been a transfer student, a student abroad, and now you’re a student during COVID. How has that been?
It’s been a learning experience, especially about myself. I’ve had to learn to be disciplined with my time and work. It’s really forced me to go to office hours more, which is good!

It’s hard, but I’m working through it.

Rachel, you’re awesome. If you could give advice to future students in DAMES and at UNC, what would you say to them?
See every single thing as an opportunity. Every single class, even if it’s not immediately on your list. Like, I took Traditional Chinese Theater even though it wasn’t the first thing on my mind, and now I know so much cool stuff about puppetry in ancient China!

Also, go to office hours to learn more about your professors! They are way, way cooler than they let on.