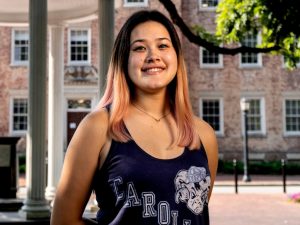 Alyssa Cooper on the campus of the University of North Carolina at Chapel Hill. July 7, 2021. (Jon Gardiner/UNC-Chapel Hill)

“It’s what makes me happy, knowing that I’m able to make an impact,” she says. “Even a small impact on someone’s life is very fulfilling for me.”

After her first year at Carolina, the double major in medical anthropology and women’s and gender studies spent her summer completing a two-month internship in Uganda for the non-profit Our Trees Our Future. And then, in her sophomore year, she was awarded the Carolina Center for Public Service’s MacDonald Community Service Scholarship, which involved completing a service project before graduation.

The scholarship marked an exciting opportunity, but she also felt pressure to make sure it was impactful – in more ways than one. “I’ve been stressing about it because I wanted it to be something that’s meaningful, not only for the community partner but also for me,” says Cooper, who is also a MacDonald Community Fellow.

She wasn’t sure where to focus her efforts. There were her dual interests in the Triangle-area Japanese community, which she’d grown up participating in, and women’s health rights. But what could she do that involved both?

The pandemic helped her find the answer.

Cooper was set to study abroad in Japan in the spring of her sophomore year, but COVID-19 interrupted those plans. Cooper, who speaks native Japanese, began connecting more deeply with the Japanese community in the Triangle as a way to make up for that lost experience.

She ended up landing on a need that addresses her interests, her double major and her desire to make sure her service is meaningful for everyone involved, at Southern Bridge International.

The local organization supports Japanese families who have temporarily or permanently relocated to North Carolina by helping them get settled, adjust to the culture and navigate the challenges that come with living in a new country.

Cooper was initially drawn to Southern Bridge International’s Prego Club, which just so happened to be organized by her neighbor, Chisato Kitazawa. The program focuses on helping pregnant or post-partum Japanese women in the Triangle navigate the American medical system – and find support for the many hurdles that come with new motherhood in a new country.

Cooper reached out to see if she could help. “We’ve been talking and discussing since last year,” says Cooper.

In the lead-up to her senior year service project, Cooper has been doing a lot of behind-the-scenes work this summer. “It’s been a lot of planning and researching because I don’t really have a lot of experiences with the birthing process in Japan’s or America’s medical systems.”

Cooper has been conducting research about both health care systems to better understand the challenges families face and pulling resources for Prego Club members. “The goal is to find what translation services are at the different hospitals and what pamphlets are in Japanese,” Cooper explains, “Even when they’re seeing their physicians, are they really understanding what is being told to them? Are they able to ask questions?”

When the fall semester begins, her work will become even more hands-on. “My goal is to eventually serve as a doula for families,” she says.

Cooper’s work with Prego Club has helped Kitazawa and Southern Bridge International’s larger mission. “Alyssa supports families who are expecting a baby by using her knowledge as a doula, the experiences she gained through both Japanese and American cultures and the leadership skills that she developed through volunteering in the Japanese community,” says Kitazawa. “We believe that this project will provide great support for Japanese families who are raising children in foreign countries.”

For Cooper, the project couldn’t be more perfect. She grew up in the U.S. but spent her summers visiting Japan, where she witnessed the gender inequalities still prevalent in the country. “I was able to see the differences with the U.S. really clearly,” she says. “I’ve always been very passionate about uplifting women. I think the goal is to be able to make sure my community is being taken care of.”