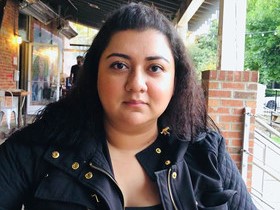 Isa Cruz is a doctoral candidate in anthropology and a member of The Graduate School’s Royster Society of Fellows. Originally from Mexico, she received her bachelor’s degree in anthropology and Latin American studies from California State University, Chico. Her interdisciplinary research focuses on the Purepecha people. “I hope that my work can serve to define policies that better serve Purepecha efforts at preventing chronic conditions. The health and well-being of individuals is, after all, an issue of justice in and of itself.”

What made you choose UNC-Chapel Hill when deciding on a program/place to study?

UNC-Chapel Hill played a key role in my graduate education even before I was a graduate student here. My first contact with UNC-Chapel Hill happened in 2012, when I was a rising senior at CSU, Chico. I came to UNC as part of the Moore Undergraduate Research Apprentice Program (MURAP) and through this experience, I learned both the ins and outs of graduate school and of UNC.

Through MURAP, I made connections on campus with faculty, staff and graduate students. In addition, the population I wanted to work for and with was concentrated at an accessible distance from Chapel Hill. I was already impressed with the caliber of UNC students but what really sealed the deal was my advisor, Dr. Amanda Thompson! It was evident that she had gone out of her way to make sure my interdisciplinary interests were supported in the pertinent departments. No other program displayed that level of care. My advisor’s actions and academic stature made UNC a no-brainer!

Tell us about your research.

My research is interdisciplinary. It combines both cultural and biological anthropology with epidemiology, genomics and nutrition. I apply these disciplines to explore how the process of migration “gets under the skin” – in other words, how the broad environment becomes part of our bodies and is reflected in our biology and our health. My research interrogates the concept of acculturation, which proposes that as time goes on newcomers adopt some of the host society’s customs while leaving some of their own behind. This change is one of the most prominent explanations for the worsening health observed among Latin American/Hispanic immigrants to the U.S.

I work alongside an indigenous population, the Purepecha, originating from Michoacán, Mexico. Purepecha migration to the U.S. dates as far back as the 1920s and migration patterns vary significantly. Focusing on a single, self-defined group allows my research to overcome the fallacy of homogenizing all Latin American/Hispanic immigrants into a single category. As is typical for anthropologists, I have directly collected all data ranging from biological samples to sociocultural observations. In 2019, I completed a three-month field season in Michoacán, Mexico, in addition to two multi-year projects among Purepecha in North Carolina.

How have you built community as a graduate student at Carolina?

The process of building community at UNC has been an organic one. Spaces like IME have put me in contact with like-minded individuals who are really cool people and also happen to be amazing scholars. My experiences as an undergrad within UNC MURAP have also resulted in lifelong friends and mentors. Both of these methods of building community have naturally resulted in a community composed of individuals from all walks of life, with very different future aspirations and a diverse set of professional interests.

What are you hoping to accomplish with your Carolina degree?

My goal is to continue working with Purepecha communities both in the U.S. and Mexico, and perhaps even extending my work into the Purepecha communities in Canada. My research has the potential to better understand how it is that chronic conditions such as high blood pressure or diabetes develop. In understanding this, we can then apply better techniques to forestall them.

In addition to producing research that sheds light upon the processes of disease formation, I would like to collaborate with the Mexican Purepecha communities in their continued struggle for sovereignty. Several Purepecha communities have gained autonomy to govern themselves following traditional parameters. This has allowed them a great deal of independence as to how to allocate the federal and state funds to which they continue to be entitled. I hope that my work can serve to define policies that better serve Purepecha efforts at preventing chronic conditions. The health and well-being of individuals is, after all, an issue of justice in and of itself.