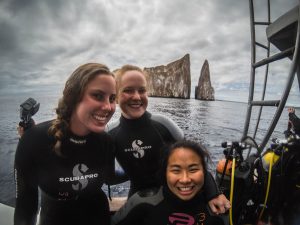 Students go diving at Kicker Rock on San Cristobal Island, a highly bio-diverse landmark in the Galapagos famous for snorkelng and diving.

Fifteen meters below the Pacific Ocean’s surface, Jackson Seymore had never seen so many sharks. After an exciting dive in the waters surrounding the Galápagos Islands, where Seymore was studying abroad, he and his host father, a dive instructor known as “Papá José,” were making a safety stop when a school of thirty to forty hammerheads swam right past them. Two curious sharks broke off from the group to investigate, coming within a few feet of them. Seymore froze, in awe of the inspiring place he’d soon come to learn about.

In addition to being a prime diving destination, the Galápagos Islands are an ideal location to study environmental science. As part of a cold-water upwelling zone, the current brings nutrients from deeper waters which then mix with the sunlight to create an abundance of photosynthetic activity, making it one of the “must-dive places in the world,” Seymore says. “So much life is supported in the waters around the islands, so it’s just fascinating to dive. Every free weekend that I had, every spare minute, it was me and Papá José on the dive boat.”

In 2018, Seymore participated in the University of North Carolina at Chapel Hill’s Environmental Studies in Galápagos Summer Program, where he took classes on tropical ecohydrology and atmospheric chemistry. For Seymore, a UNC-Chapel Hill class of 2020 chemistry major and marine science minor, his time on the islands was part of a broader learning experience as he prepares for a career in chemical oceanography.

“The ecosystem is such an integral part of life there,” he says. “People live connected to the nature on the islands. You walk down to the fish market, and there are three, four seals just sitting there while someone cleans a fish that they just got off the boat.”

Thirty years ago, it would have been much harder for a chemistry major like Seymore to study abroad. Programs tended to be designed for foreign language or area studies majors, not science majors. That’s not the case anymore, says Heather Ward, associate dean for study abroad in the UNC College of Arts & Sciences.

“I’m excited that we’re seeing more STEM students participate in education abroad,” Ward says. “There’s growth in interest at Carolina and at the national level. UNC-Chapel Hill has been out ahead of that curve for many years. In 2016-17, there were far more biology majors studying abroad than foreign language majors. About a third of UNC faculty-led study abroad programs are in STEM fields.”
The growth in study abroad participation for science majors is due largely to concerted efforts by the Study Abroad Office to make programs more accessible to all students. One of the main challenges for science majors hoping to study abroad has been strict course progression for certain degree programs or tracks of study. Factors such as these make it challenging for students to take time away from campus.

“As a chemistry major, I found it difficult to find a time to go abroad,” says Emma Ehrhardt, a class of 2020 chemistry and psychology double major.

To address that, study abroad program directors have done significant outreach to various departments to identify study abroad programs that would be able to satisfy requirements for affected majors. The result has been a number of new programs designed just for STEM majors, including semester-long science offerings from Carolina’s existing strategic partners and faculty-led programs that take place during the summer.

In fact, for many science majors, summer programs are the easiest way to study abroad. Ehrhardt found her match in a summer program in Ireland in 2018, where she took an organic chemistry class led by UNC-Chapel Hill teaching assistant professor Josh Beaver. This allowed her to take a course that was required by her major in a more intimate setting, while also getting the cultural experience of studying abroad. “It’s really neat that this program offers you the opportunity to take a class that you would otherwise take in a hundred-plus person lecture hall,” says Ehrhardt, who enjoyed being able to instead take the course with about twenty peers and a UNC-Chapel Hill faculty member.

Because the program was led by a Carolina professor, Ehrhardt also knew that the credits would transfer. The study abroad office has been working with academic departments to approve study abroad credit so that it counts toward the major. “That’s a really direct way that we can have an impact on participation in science programs,” Ward says.

In addition to course credit, Ward says that there are other experiences that are in high demand for students wanting to go abroad, including internships, service-learning or undergraduate research. The office’s goal is for study abroad programs to blend seamlessly with students’ on-campus curriculum.

“The study abroad experience should be an extension of the academic program at Carolina,” Ward says. “Eventually, I would hope that whole experience is integrated for the students, so that what they learn on campus helps them make sense of their experience abroad, and, in turn, the experience abroad comes gives them a new lens on what they learn in the classroom. I’ve seen a number of students who study abroad discover that their major has applications globally that they’ve never considered before.”

That was certainly the case for Will Blanks, a class of 2019 biostatistics and chemistry double major who participated in a summer research program at the National University of Singapore in 2018. He paired up with a professor at Singapore’s National Cancer Centre to conduct research on biomarkers in the early detection of liver cancer, which he continued to pursue after returning to Carolina.

“Singapore is rated the most technologically advanced city in the world, but it’s becoming one of the top biomedical research centers in the world, too, just because of the amount they’re investing in research money and because of the close coordination everyone has,” says Blanks, who is now considering applying to medical school at the National University of Singapore. “I wouldn’t have had this experience had it not been in Singapore just because of the amount of resources they have and the interconnectedness of the scientific community.”

“My time on the islands has afforded me the opportunity to get involved in real research, and that sort of experience is invaluable going into the academic field,” Seymore says. “The fact that I was able to do something. that I love—dive—while also learning and being involved in research just melds the entire experience together to show that this is a thing that I can do, and this is the reality that I want.”

After all, study abroad experiences are about more than just the curriculum. They’re about offering a broader perspective on the world and global issues.

“More and more, we see multinational communities of scientists or engineers coming together to solve problems like water quality or soil conservation or infectious disease” says Ward. And, of course, there’s cultural learning as well, experiencing cultures different than one’s own and experiencing ways of life that students might not have been exposed to before. Complementary classes about local history and culture or excursions can be a fulfilling aspect of the study abroad experience beyond the laboratory.

On the boat ride back from a snorkeling trip at the Galápagos Island of Isabela, Seymore and his classmates came across an astonishing sight: manta rays, dozens of them, breaching as they fed on krill at the water’s surface.

One of the students asked if they could get in the water. The boat was stopped and the students dove into the ocean to watch manta rays up close — nine feet wide, with shiny black skin glistening in the sun, flipping and gliding through the clear ocean waters. As Seymore watched, a ray swam right up to him, stopping about a meter away before diving down deeper into the water, as if in slow motion.

“That’s when it just hit me that this is the world I live in,” Seymore says. “There are so many interconnecting pieces, and it’s right there, and it’s tangible, and you can reach out and almost just touch it.”

This story originally appeared in the 2020 issue of Carolina Passport magazine.