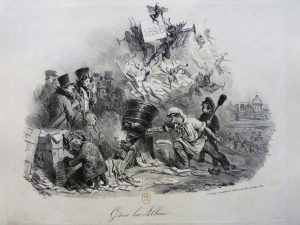 In Auguste Raffet's "Gâres les Albums," a printmaker lights a mortar full of albums and demons and fires them at the city of Paris, to the delight of his patrons. Raffet suggests that visual artists who make popular prints secure their own exclusion from such lofty institutional recognition, according to UNC art historian Kathryn Desplanque. (image courtesy of Kathryn Desplanque)