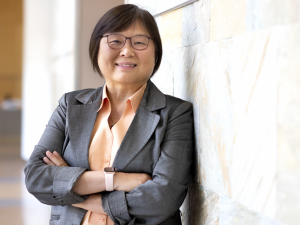 
Cancer treatment providers in developing countries often lack equipment and training to provide the most advanced type of care. EmpoweRT is working to change that.

When Innovate Carolina last caught up with Sha Chang, founder of social enterprise EmpowerRT and professor at the UNC School of Medicine, she was thrilled that her venture had just secured its first test site in Africa. Now, just two years later, EmpowerRT has wrapped its initial work at the Zambia Cancer Disease Hospital and is looking to bring its solution to cancer patients in other areas of the world.

EmpowerRT improves cancer treatment in low-to-middle-income countries (LMICs) with a solution similar to modern treatment technology, but at less than 10 percent of the cost. At the Zambia test site, EmpowerRT demonstrated the feasibility of its solution in a clinical setting. The field work also allowed the team to test baseline methods for preparing and deploying its solution to other low-resourced areas.

“Changing the world doesn’t mean that everyone needs to find the next big thing. We should emphasize sharing knowledge and the inventions we already have, so we can create real benefit to people in need,” says Chang, director of medical physics research in the medical school’s radiation oncology department. “I hope to make a meaningful impact in cancer treatment with our solution that enables resource-limited cancer clinics to do more with less.”

EmpowerRT focuses on LMICs, where its solution is needed most. According to the World Health Organization, cancer is the second leading cause of death globally, accounting for an estimated 9.6 million deaths in 2018. Approximately 70 percent of those deaths occurred in LMICs, and by 2030, cancer mortality rates in LMICs are projected to increase by more than 70 percent. By contrast, they are projected to decrease by 30 percent in high income countries (HICs), according to the National Cancer Institute.

The reason for the disparity is multifold. Many developing countries lack resources dedicated to cancer research and treatments, and most radiotherapy clinics in those countries still rely on basic or outdated equipment. In addition, those clinics lack the funds, training and infrastructure to implement modern 3D and intensity-modulated radiation therapy (IMRT) technology, which is more effective in treating cancer with fewer side effects.

Chang sees EmpowerRT’s novel adaptation of technology that was previously developed and clinically used at UNC hospital as a potential equalizer.

“Our mission is to help people in developing countries improve cancer therapy without spending millions of dollars they don’t have,” says Chang. “Our four-prong solution – hardware, software, service and training – can help cancer clinics in low-to-middle-income countries save up to three million dollars when our solution is brought to their clinic.”

At Zambia Cancer Disease Hospital, Chang and her team focused on proving that the EmpowerRT solution can maximize the value of radiation therapy equipment that already exists in clinics to deliver affordable, high-quality treatment with low toxicity.

“With global cancer care, there are many challenges including availability, cost and barriers to adoption,” adds Chang. “The Empower RT solution aims to do more with less: do more with what is already available in the low-resource clinics, do more with the knowledge and technology we have already and do it simply.”

During the test phase in Zambia, Chang and her team faced many hurdles. Their learning curve involved adjusting to a different work culture, while dealing with broken equipment and inexperienced hospital staff. They also had to contend with the country’s strained financial situation and schedule delays caused by extended government holidays. Chang quickly realized that her team would have to work through unanticipated twists outside their control.

“I am not going to lie. I felt completely hopeless many times,” says Chang. “But somehow, there is a force pushing me to put one foot in front of the other, and that pays off. We exceeded my expectations.”

The team’s persistence paid off. They installed software and hardware, conducted training on compensator-IMRT treatment planning, recyclable device fabrication and quality assurance to doctors, therapists and physicists to use EmpowerRT’s solution safely in their clinic. The team also implemented a train-the-trainer program, proving how user friendly the software is.

Several innovation and entrepreneurship programs at UNC-Chapel Hill – including CUBE, Startup UNC, and KickStart Venture Services – worked with Chang and EmpowerRT throughout the venture’s evolution. Support from these programs arrived in many forms: entrepreneurship mentoring, grants and networking, to name a few.

With lessons learned during its time in Africa and through ongoing support from programs at Carolina, the team is working on a small business proposal to develop and bring more feasible and low-cost radiation therapy solutions to more low- and middle-income countries.

“You have to have strong partnerships. You have to have shared determination,” says Chang. “There’s no question we’re making an impact that profit-driven large companies are not. We are pioneering an innovative social enterprise pathway to reduce global cancer care disparity by maximizing the resource and knowledge already exist in the world.”