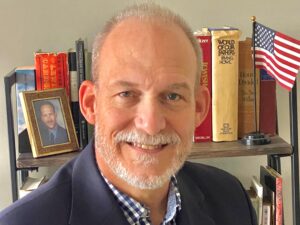 George Sibley has assumed the role of Diplomat in Residence (DIR) for the Mid-Atlantic region of the U.S, covering North Carolina, South Carolina and Virginia. A career member of the Senior Foreign Service, Sibley most recently served as deputy chief of mission and then chargé d’affaires at the U.S. Embassy in Rangoon, Myanmar. Sibley is jointly hosted by the University of North Carolina at Chapel Hill and Duke University.

The Diplomats in Residence are career Foreign Service officers who are located throughout the United States and are responsible for providing guidance and advice to students, professionals and the community in general about careers and opportunities in the U.S. Department of State. Diplomats in residence are available to answer questions and share insight with those interested in Foreign and Civil Service careers, internships and fellowships. During their tenure, they visit with students at universities, colleges, and community colleges in their region.

Sibley’s extensive career in foreign service spans decades. Previously, he served at the U.S. Embassy in New Delhi from 2013-2017 as the minister counselor for economic, environment, science and technology affairs, and as the U.S. co-chair of the U.S.-India Science and Technology Endowment Fund.

Before arriving in New Delhi, Sibley was director of the Office of Environmental Quality and Transboundary Issues at the U.S. Department of State. Prior to that, Sibley served a year in Iraq as the senior advisor for Northern Iraq and as the team leader of Provincial Reconstruction Team Ninewa, following two years as the director of the Office of Iraq Political Affairs at the Department of State. He also served as consul general in Kolkata, India, from 2002-2005.

“We are excited to welcome George Sibley,” said Barbara Stephenson, vice provost for global affairs and chief global officer at UNC-Chapel Hill and former U.S. ambassador. “Especially amid these unprecedented times, our students will greatly benefit from sharing his vast experience in regions around the world.”

In 2002, Sibley earned a master’s degree in public policy, in the field of international relations, following a year as a John L. Weinberg Fellow at Princeton University’s Woodrow Wilson School. Sibley received a bachelor’s degree in biology and religious philosophy from Oberlin College in 1977. Prior to joining the Foreign Service, he served 11 years in the merchant marine, acquiring a Limited Master/Unlimited Chief Mate’s license.