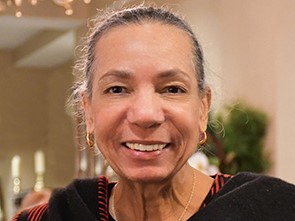 SILS Distinguished Alumna Irene Owens has created a fund to support new students of color and those interested in issues of diversity, equity, and inclusion at the UNC School of Information and Library Science (SILS).

The fund will make it easier for such students to matriculate to SILS and enable them to engage in local, national, and international programs related to their interests. It will also further enhance local and global opportunities already offered by SILS.

Owens’ own experience with study abroad at SILS inspired her gift. While completing her doctorate, she studied at Hebrew University in Jerusalem, Israel. She credits her time there with helping her more fully understand that “information and library science – at its very core and essence – is local, national, and international, as well as interdisciplinary.”

In addition to her PhD from SILS, Owens holds a BS from Barber-Scotia College, an MA in Religious Studies from Howard University, and an MS in Library Science from the University of Maryland.

While working at Howard University, Owens accomplished several of her goals as an LIS professional, and then decided that she “needed another mountain to climb.” At the time, she had no idea where that mountain was or how best to climb it, but she did realize was that SILS was a great place to prepare her. Owens said her doctoral studies were challenging and equally rewarding, supported by effective mentoring, especially that of Ed Holley and Barbara Moran.

Owens spent two decades at the University of Texas at Austin, including 10 years in the Graduate School of Information, and was the first African-American to receive tenure there. She returned to North Carolina in 1995 to become Dean of the School of Library and Information Science at NC Central University, a position she held until her retirement in 2016.

She is currently a member of the SILS Alumni Inclusion and Diversity (SAID) Committee and the SILS Campaign for Carolina Committee.