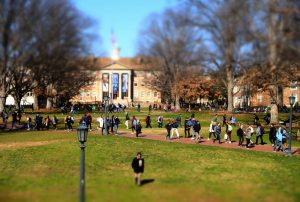 UNC-Chapel Hill was awarded $210,398 in funding for the program by the U.S. Department of Education. These fellowships allow doctoral students to pursue dissertation research abroad in foreign language and area studies for six to 12 months. During their research, fellows deepen their subject knowledge and develop skills they would not otherwise be able to through opportunities in the U.S.

The Fulbright-Hays DDRA Program is a part of the Fulbright Program, which dates to 1946 when the late U.S. Senator J. William Fulbright sponsored legislation to create the program to increase understanding between the U.S. and the rest of the world.

The 2021 UNC Fulbright-Hays DDRA fellows are listed below in alphabetical order with descriptions of their respective projects.

Laura Cox is a doctoral candidate in the Department of History. Cox’s dissertation, titled “South Africa’s International Freedom Fighters—Women Exiles and Coalition Building During the Anti-Apartheid Movement,” will examine how the South African anti-apartheid liberation organization, the African National Congress Women’s Section, engaged in global coalition building from the 1960s through the 1990s with three key representatives: Ruth Mompati, Gertrude Shope and Frene Ginwala. Through use of archival sources and oral histories in South Africa, Switzerland and Great Britain, she intends to increase the visibility of women who, she hypothesizes, reconfigured the gender dynamics of the liberation struggle over time.
Hometown: Sacramento, California

Arianne Ekinci is a doctoral candidate in the Department of History. Ekinci’s dissertation, titled “Fragile Citizenship – East Turkestanis in China and Diaspora Nineteen Twenty to Nineteen Seventy,” investigates the historical development of East Turkestani political identities in homeland and diaspora from 1920-1970. Drawing from a variety of public and private documents, she examines the development of the idea of East Turkestan as a political community, negotiation between the need to gain immediate security through cultivation of commonalities with host country governments and emphasis of unique identity needed to sustain advocacy for eventual sovereignty, and the conscious cultivation of community history to support diverse claims to political belonging. This project will be the first on the subject to unite Chinese and Turkish studies of the Uyghurs/East Turkestanis, and the first to use Indian archives.
Hometown: Stillwater, Minnesota

Isabel Laterzo is a doctoral candidate in the Department of Political Science. Laterzo’s dissertation, titled “Political Competition and Crime Policy in Brazil,” examines Brazilian states and gubernatorial elections beginning in the mid 2000s to argue that governors have become more responsive to citizen demands due to a deterioration in political party strength and partisanship among citizens. She also argues that candidates are particularly responsive to citizens when violence is extreme and have become more responsive to concerns about human rights. She seeks to research this phenomenon using a mixed methods approach relying on survey data, campaign platform text-analysis and qualitative interviews in the states of Rio de Janeiro, Minas Gerais and Bahia.
Hometown: Pelham, New York

Cody Love is a doctoral candidate in the Department of History. Love’s dissertation is titled “Loyal Subjects. Rebellious Citizens. The Indigenous Struggle for Water in Seventeenth Century NewSpain.” Love explores the multiple struggles over water resources involving Indigenous peasant communities in 17th century Central Mexico (especially in what are now the states of Puebla, Tlaxcala, Mexico and Oaxaca). He plans to explore this struggle through the environmental, economic, legal, political and cultural meanings and impacts it had for Indigenous communities. Using evidence from local, state and national archives, his project will illuminate colonial power struggles over natural resources and political positioning among indios in the colonial edifice of the Viceroyalty of New Spain.
Hometown: New Orleans, Louisiana

Emily Taylor is a doctoral candidate in the Department of History. Taylor’s dissertation, titled “Beyond Donde Estan Women and Social Change in Guatemala,” examines women’s activism during the Guatemalan internal conflict, exploring how women played diverse roles in the insurrectionary movement in the late 1970s and the human rights movement of the 1980s. The Partido Guatemalteco del Trabajo (PGT), a Communist revolutionary group, was active in the late 1970s and included both men and women in its ranks. She will explore women’s roles in the PGT as well as the impact of gender in individual and collective experiences. She will also analyze how gender and power intersected to influence the trajectory of individual lives, the popular movement, and ultimately, Guatemalan history.
Hometown: Greenville, South Carolina

Abigail Warchol is a doctoral candidate in the Department of History. Warchol’s dissertation, “Burdens of Care – Orphans and Colonial Caretaking in Saint-Louis Senegal,” examines the interaction of state formation, humanitarianism and childhood through studying how colonial officials, Catholic missions and Africans negotiated their responsibility to care for orphaned children in twentieth-century Saint-Louis, Senegal. Using the colonial archive, she traces the shifting ways orphan care fit within questions of colonial reform in a post-emancipation urban society, both in discourse and in practice. Via non-colonial sources, she explores how children and families may have experienced and challenged forms of colonial caretaking.
Hometown: Alliance, Ohio