Somos Carolina. We Are Carolina. 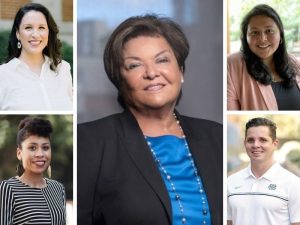 As Latinx Heritage Month comes to an end on Oct. 15, five Carolina employees with heritages and traditions from different countries tell their stories.

One risked prison by defecting to the U.S. One immigrated with two children and $150 in her pocket looking for opportunities. One shares a dual heritage that helped her dance through life. And the others left rural Southern towns to guide others like them to a college education.

Their stories reflect the rich diversity in Latinx cultures and experiences.

‘Very much a North Carolinian’

Marcela Torres-Cervantes, new assistant director for the Carolina Latinx Center, brings the perfect mix of life experiences to her job.

She was six months old when her family moved from Mexico to Clinton, North Carolina, in 1992. At that time, few Latinos lived in Sampson County, where her father worked as a hog farmer.

“I didn’t learn English until I went to school because my mom was adamant about us holding onto our native language,” Torres-Cervantes says. Beginning in pre-K, she became immersed in American culture and began speaking English. It wasn’t until second grade that she gained a Mexicana classmate.

Years later, Sampson County had one of the state’s largest percentages of Latino population, according to Carolina Demography. By then, Torres-Cervantes had excelled academically, especially in predominantly white honors classes, and enrolled at the North Carolina School of Science and Math. For the first time, she mingled with people from different cultures.

“I saw other first generation immigrant kids of all different backgrounds from all over the world, all different languages,” she says. “That was affirming for me because I had never even met a Jewish person.” She also realized that she could take pride in her unique heritage.

Those feelings accelerated when she attended George Washington University, where young Latinos who had grown up in the U.S. surrounded her. “They were brilliant and so proud of their culture at home,” she says. “Many were from large cities like New York, Los Angeles and Miami, where they had great role models.” She saw the vast diversity in Latinx identity.

After graduation, she moved to Athens, Georgia, and was reminded of “growing up in Clinton” while earning a master’s degree from the University of Georgia. “I felt a big disparity of comfort, pride and identity there. It was a reminder that there’s a lot of work to be done,” she says. “Now, I get to work with young people who remind me of the young person I was.”

Torres-Cervantes says that every day is a version of Latinx Heritage Month. Whether celebrating holidays such as Dia de los Muertos or smaller affirmations such as sharing candy from a local tienda, she seeks ways to blend her heritage and her North Carolina roots.

She touches those roots when visiting Clinton, where hog-farming odors can be strong. “I was never allowed to complain about the smell and, if I did, my dad would say, ‘That’s the smell of your college tuition.’ And, he was correct,” she says. “So, I’m very much a North Carolinian.”

Yaidel Gamboa looked up at the American flag fluttering in front of the U.S. Embassy in Caracas, Venezuela. Then, he stepped through the door to ask for asylum.

A former Cuban national team diver, Gamboa was in Venezuela to coach a junior-level team. Though he risked deportation and imprisonment, Gamboa decided to make his way to America.

After seven stressful months of survival that included washing dishes at a bakery while hiding in another town, Gamboa received a visa to enter the U.S. in 2009. Today, he is Carolina’s head diving coach.

Gamboa’s diving life began at age five in his hometown of Camagüey when his mother enrolled him in a local diving school.

“In the seventh grade, I was selected to go to the national training center,” Gamboa says. He won 10 junior national titles and moved to Havana to train as a member of the national team.

He retired from diving at 20. After earning a bachelor’s degree in physical education and athletic training, he began a series of coaching jobs, which led him to Venezuela. There, he set his eyes on a better life in the U.S.

“I came with no English, without family or friends, without anything,” Gamboa says.

He worked in construction, then as a SeaWorld diver for four years. He studied English and made connections in American diving. He became a U.S. citizen in 2015. In 2016, he moved from coaching a local diving team to his first collegiate job.

“Becoming a U.S. citizen was a dream come true for sure, after some challenging times. My mom was divorced. It was tough, and she had to work hard to raise me and put food on the table every day, but it was a great growing experience.”

Family — his 13-year-old son, four brothers and a sister — is also important. His mother and two brothers live in the U.S. Gamboa hopes to bring the others here, too.

At 38, Gamboa sees his time in Cuba as having “taught me a lot and made me strong. Now, I just push through tough times and never, never make an excuse. I grew up with that in my DNA and still carry that in who I am and what I do today.”

‘We should give back.’

Nilda “Nena” Peragallo Montano came to the U.S. as a young woman with a nursing degree, two small children and $150.

Her journey began in Chile, carried her throughout the world and to Carolina, where she continues her life’s work as dean of Carolina’s School of Nursing.

“I was born in a family of immigrants, and became an immigrant when I came to America,” Peragallo Montano says. Her paternal grandparents, born in Italy. Her maternal grandfather, born in Spain and grandmother, born in Chile.

She grew up in “a very mixed environment,” eating Italian food in one house and Chilean food in the other, among other cultural influences.

“But I consider myself from Chile,” Peragallo Montano says.

She first traveled to the U.S. as a high school exchange student, then returned to Chile to earn a bachelor’s degree in nursing. With a degree in hand and looking for opportunities, in 1976 she immigrated to the U.S., where she became a naturalized citizen.

While living in Chile, Germany and many American cities — Baltimore, Philadelphia, Chicago, Orlando, Miami, Houston and Morgantown, West Virginia — Peragallo Montano always found Chileans with whom she shared celebrations and traditions. A favorite is Sept. 18, marking Chile’s independence from Spain. Chileans celebrate at fondas — tents or other venues — featuring traditional foods such as empanadas and typical dances such as the cueca.

But, most critical to maintaining her culture, Peragallo Montano says, is using Spanish.

To this day, she and her children speak Spanish to one another. “It became our custom.”

Peragallo Montano values her heritage’s sense of community and family. “We try to keep strong ties with our family, our extended family and our community. Our society’s more community- and family-based than individualistic. That’s a value that I hold dear.”

Sense of community helped focus her research. “My research, especially early on when little attention was given to HIV prevention in Latino communities, and my work on health disparities enabled me to maintain those values.”

She was inspired to develop a career that includes helping her community.

“The opportunities here are real, but everybody may not have the same opportunities,” Peragallo Montano says. “We should support each other and help our community avail themselves of opportunities where they are.

“This country gave me incredible opportunities. I’m so thankful for that.”

‘I can’t separate my two identities.’

Her parents, Louis and Veleria, shared their heritages through dance and brought people into their community which, in turn, extended that community.

Ramos earned a bachelor’s degree in psychology and Spanish and a master’s degree in social work at Carolina, then followed her parents in the work of uniting community as director of the Bonner Leaders Program and interim director of the Campus Y, a Carolina space for service, education, advocacy and activism.

Her father was born in Harlem to parents from Puerto Rico’s areas with cultural influences from African slaves. Her mother is Black and was born in Lumberton, North Carolina. They met as students at Binghamton University, where they studied African and Caribbean dance.

“Binghamton was not super diverse; it was important to my parents to build community and seek it out,” Ramos says. “They taught dance in schools and were very intentional in creating community. They invited everyone in.”

As a child, Ramos asked her father to teach her to speak Spanish. He insisted that she learn “proper Spanish” at school. She began classes in middle school and made Spanish a college major because she felt she lacked that part of her heritage.

Still, there were plenty of opportunities to connect to her parents’ cultures.

“In family gatherings, music sticks out in my memories. Regardless of your ability to dance, you had better be ready to move.

“One of the traditional forms of dance that we do is bomba, with roots connected to African slaves in Puerto Rico. There’s a lot of drumming, and the relationship between the band and the dancers brings improvisation and rhythms and just letting it go.”

Her parents involved Ramos and her three siblings in performances. “If you were my friend, it didn’t matter — male, female —  you’d be called on to participate. They made it accessible like ‘not only is this part of our identity, but we think you’ll find it something fun that we can all share.’”

Latinx Heritage Month calls people to celebrate identity and history, Ramos says. “It’s a reminder of how history’s racial injustices are impacting people and of the strength, power and honor on display throughout the nation today.

Ramos says, “I can’t separate my two identities. Celebrating means one thing for me, but for a lot of my peers, colleagues and community, that means so many different things.”

As a college student, Elaine Townsend Utin craved a better understanding of her Latinidad, or Latina identity.

Years before, Townsend Utin had immigrated with her family from Peru to Georgia and Arkansas before finding a home in Waxhaw, North Carolina. Living in predominately white, rural towns, she was aware of the differences between the local community and her family.

“The knowledge gap of Latinx history, contributions and culture was and continues to be painfully evident in school — especially in the South. It was difficult to connect positively to who I was as a Latina,” Townsend Utin says.

But, in her home, she connected to her Peruvian heritage through the teachings of her mother and abuelita (grandmother).

Townsend Utin’s favorite cultural traditions include the complex flavor profiles in Peruvian cuisine as they reflect Peru’s diverse cultures and terrains — jungles, coastal plains, mountains and deserts. “I’m blessed to have the world’s best cooks in my family. My mom, my abuelita, my tias (aunts) and tios (uncles).”

Townsend Utin preceded her four siblings to Carolina as a first-generation college student. Unfamiliar with U.S. higher education system, she worked hard to understand admissions processes. Her work paid off. She attended Carolina as a Gates Millennium Scholar. Today, three of her siblings are Carolina alumni and the youngest is a first-year student.

Townsend Utin believes such support systems are essential for helping Latinx youth reject negative messaging about Latinos and immigrants in society and media. She wants future generations of Latinx students to feel proud of their culture and to be their authentic selves.

“Latinx Heritage Month is one step closer to ensuring that the history and diversity within our community are represented, recognized and honored, but the month should be every day.”

“We are a part of the fabric of this country and this state. Somos Carolina (We are Carolina).”