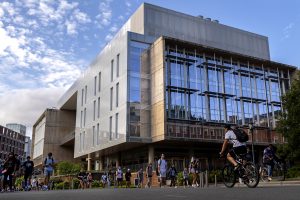 As the U.S. contemplated entering World War II, it and other allied powers had a critical need.

Air power was a major element of German military power, and the ability to detect incoming aerial attacks earlier could enable quicker responses and save lives. Using acoustic devices to hear approaching enemy planes and send patrol flights was common, but they were not good early warning systems because they could only identify nearby planes.

The clock was ticking to find a new scalable solution.

To address the imminent problem, the U.S. government in collaboration with its allies issued a “grand challenge,” rallying scientists, engineers and companies to figure out how to design, build and manufacture accurate radar systems at scale. As a precursor to radar, early detection technology using radio waves had been suggested in the 1930s. But the existing radar technology was primitive with limited range and accuracy. Everyone needed to come together to quickly find a solution.

The mission, of course, was successful. Radar soon became the invisible weapon of World War II, and has gone on to become an invaluable technology in applications ranging from air traffic control and meteorology to self-driving cars.

This wasn’t the first time – and wouldn’t be the last (consider the quest for a COVID-19 vaccine) – that government-coordinated grand challenges rallied companies and researchers around a public goal to innovate new technology. Typically, the new technology, as with radar, not only solves a specific problem, but also can kickstart an entire industry.

But not all grand challenges are successful. While some, like the development of radar, have been spectacular wins, other efforts, such as the creation of an artificial heart, have been disappointing.

What separates successful grand challenges from unsuccessful ones? Mahka Moeen, associate professor of strategy and entrepreneurship and Sarah Graham Kenan Scholar at UNC Kenan-Flagler Business School, collaborated with Rajshree Agarwal and Seojin Kim at the University of Maryland examine this question.

They provide lessons from six grand challenges that range from World War II era initiatives to recent efforts at the cutting edge of medicine and manufacturing in “Leveraging Private Enterprise: Incubation of New Industries to Address the Public Sector’s Mission-Oriented Grand Challenges” forthcoming in Strategy Science.

The first two – radar and antibiotics – were born out of the urgent challenges of World War II. The other four are more recent.

The researchers selected the grand challenges without regard to their success or failure. Four have been clear successes that led to new industries. Molecular manufacturing has yet to come close to the promise of its most ardent supporters in the 1980s. And although an artificial heart was eventually developed, the device is not widely used and other treatments for heart problems are much more common.

When the researchers examined the six grand challenges, they defined success as “having achieved the goal of the mission within its original defined timeline.” While all of the grand challenges benefited from being issued and sponsored by the government, Moeen and her colleagues identified five common themes that differentiate the successful challenges from those that failed.

Articulating the problem rather than a preferred solution: Success was more likely when the public agency identified the problem it wanted to solve, but didn’t prescribe a favored solution. When solutions are not predefined, innovators gather more information and explore a wider variety of options. In the unsuccessful effort to create an artificial heart, for example, the focus was on a total implantable and permanent artificial heart, rather than just a substitute for the cardiac function.

Focusing on the bottleneck behind the problem: When considering all the problems that must be addressed within the scope of a grand challenge, focusing on critical bottlenecks can produce the highest return. In the molecular manufacturing initiative, any type of nanotechnology-related research could receive support, so researchers had little incentive to focus on the most critical aspects of the problem. This contrasts with the penicillin case, where the grand challenge focused on the bottleneck of finding a scalable production process.

Providing a platform and incentives for sharing knowledge: By their nature, private-sector innovators might be reluctant to share knowledge, lest they sacrifice a competitive advantage. But scientific advances often accelerate when people can draw on each other’s achievements and avoid repeating others’ mistakes. Here, the public agencies involved in successful grand challenges provided platforms for knowledge sharing as well as setting expectations and providing incentives to encourage sharing.

Aligning the original goal and implementation of the solution: Success is more likely when the public agency creates structures to align the use of resources with the goal of the grand challenge. Alignment, and the structure that supports it, can provide the context to support pivots to new solutions and encourage the abandonment of approaches that no longer work.

These common themes provide valuable insights about what makes a grand challenge a success, but Moeen and her colleagues don’t believe all – or even a majority – of innovation efforts should be structured as grand challenges.

In the majority of cases, entrepreneurs and the private enterprises already have the purpose and motivation to innovate, Moeen says. Grand challenges are useful for ambitious, complex challenges where there’s a clear societal benefit and the time horizon and risks are too daunting for the independent mobilization of the required number of diverse, private enterprises.