Home / News Stories / Thanks to UNC and the Galapagos, UNC Alum Ready to Take on Medical School

Thanks to UNC and the Galapagos, UNC Alum Ready to Take on Medical School 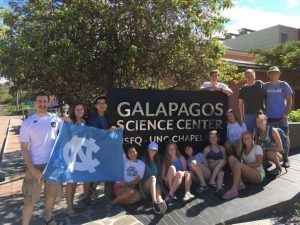 The study abroad cohort in front of the UNC/USFQ Galapagos Science Center on San Cristobal, Galapagos.

When Jack Leland opened his letter of acceptance to UNC Medical School’s Class of 2026, he thought back to his time as an undergrad at the University of North Carolina at Chapel Hill and all the experiences he had that led him to this moment. One of his most transformative adventures as a Tar Heel was his time spent studying abroad in the Galapagos Islands.

As a sophomore, Jack spent six weeks living in the Galapagos Islands and took one course on environmental chemical processes and one on earth systems. His cohort was only about a dozen students, which gave them a chance to grow close during their time together. Studying in the Galapagos is not a typical classroom experience. “To be able to see sea lions on the way to class – it’s amazing,” Jack said. The group went on various field trips, visiting sites all over the islands to study weather patterns. Students spent time analyzing rain, wind, and saturation data as well as analyzing particulate matter in the air. For one project, Jack and his partner decided to install their sensor in a nightclub, not surprisingly finding sky-high levels of pollution.

While he may have been the only pre-med student in the group, Jack’s experience in the Galapagos further encouraged him to apply to UNC-Chapel Hill’s medical school, where he is excited to enroll next year.

Maybe one of the most impactful parts of his study abroad experience was the time he spent learning Spanish. “Even if my Spanish wasn’t that great when I got there, I was eventually able to have really meaningful conversations. It made me realize how important it is to meet a patient where they are. Now, one of my roles is to work as a Spanish interpreter here in a medical clinic in NC,” said Jack.

His advanced language level has allowed him to connect with Spanish speakers here in the United States. Currently, Jack is working in Benson, NC with a program called MedServ, which places recent college grads in medical clinics in low-resource, high-need areas around North Carolina for one year. Jack speaks Spanish every day on the job. “There is a high population of farmworkers here, so sometimes we stay until 11 or midnight to have appointments with workers that can’t come in during the day,” said Jack.

Jack’s time spent living with his host family in Ecuador was more than a great opportunity to practice his Spanish. His Ecuadorian family brought him to various gatherings, including a baptism for the youngest daughter. “The extended family had a large presence there, so there were always people over. We would sit on the porch and people would walk by, stop and chat,” said Jack.

As the youngest of five, family has been an important part of Jack’s childhood. For this reason among others, he is strongly considering practicing family medicine. “I think being [in the Galapagos] reinforced the notion of being involved in and committed to a place. Their whole family – countless generations of members have stayed there, and they will stay there. When you go live with them, you become part of that community. Being in family medicine means you are part of the community, committed to it, there if your neighbors need you and vice versa. It reinforces that notion of being part of the community, especially in a small town,” said Jack.

Jack’s time as an undergrad at UNC-Chapel Hill exposed him to advanced Spanish language skills and Ecuadorian cultural values that have helped propel him to pursue his passions in a medical career. Studying at UNC-Chapel Hill’s medical school will allow Jack to continue to broaden his skills and his Tar Heel family. Thanks to Chapel Hill and the Galapagos, Jack is prepared to reach patients wherever they are in his future practice. “I can’t imagine there being a more meaningful career path for me,” said Jack.