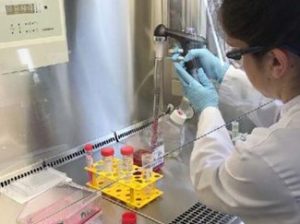 Emily Price works in a lab.

Brandi Martin, Casey McGoun and Emily Price got hands-on in a laboratory at the Institute of the Ruhr University in Bochum, Germany, during the summer and fall of 2019.

The three are Master of Science in Public Health students in the Department of Environmental Sciences and Engineering at the UNC-Chapel Hill Gillings School of Global Public Health. They all work in the lab of Leena Nylander-French, who is a professor in their department and director of both the North Carolina Occupational Safety and Health Education and Research Center and the Occupational Exposure Science and Industrial Hygiene Program.

A 40-hour-minimum practicum experience is one requirement of their degree program, and Nylander-French’s international academic network yielded global opportunities for her students. Her laboratory is funded by the National Institute of Occupational Safety and Health, and the same organization also funded travel and lodging for the students’ practicums.

“Our lab is one of the only ones that I know of looking into occupational exposure science,” says Price. “For example, I work on research into exposure to diisocyanates in the auto refinishing industry. We take samples from workers — mostly spray-painters — and measure the amounts of these chemicals in their systems to better understand potential negative health effects.”

“I study exposure to Polycyclic Aromatic Hydrocarbons (PAHs), which are chemicals released from activities like burning coal, trash and wood,” McGoun says. “I’m working with the Carolina Population Center to evaluate exposure to PAHs linked with cookstove use in Rwandan households.”

Price and McGoun traveled together to Germany in July, working for three weeks in the laboratory of Heiko Käfferlein, head of the Center of Toxicology at the Institute for Prevention and Occupational Medicine of the German Social Accident Insurance within Ruhr University in Bochum.

Price assessed the impact of PAHs on lung cells, manually counting cell mutations under a microscope to evaluate DNA damage, which is a precursor to cancer. Down the road, this work might inform global interventions to replace traditional cookstoves with more modern, efficient stoves that release fewer PAHs.

“It was really cool to see how things are done in another regulatory environment,” she shares. “Working in a government-based lab in an international setting was an outstanding real-world experience.”

McGoun, meanwhile, supported research into an insecticide called flupyradifurone, which is relatively new and already widely used in the United States. It’s a systematic insecticide, he explains, which makes it especially concerning because it gets into plant tissues and cannot be washed off, meaning buyers consume it along with their fruits and vegetables.

McGoun assessed the urine samples of an individual exposed to a controlled dose of flupyradifurone in an attempt to learn more about how concentration levels of the chemicals change in the body over time. This research could eventually influence policies around use of the insecticide in the U.S. — it is already banned in the European Union.

Martin, who currently works with the Environmental Protection Agency (EPA) while studying at the Gillings School, traveled to Bocham for ten days over fall break. At the EPA, she studies the effects of air pollution on the human cardiovascular system In Germany, she worked on the same PAH study as Price, but used flow cytometry instead of manually counting cell mutations.

“Coming from a background with large government agencies and universities, it was a pleasure to conduct research in such an intimate environment,” Martin says. “The language barrier was a new twist, though! I speak no German, and my lab partner was originally Iranian with limited English. Luckily, we both speak some French and were able to combine that with nonverbal communication and help from Google Translate to achieve our goals.”

“The value students with global experience bring to my laboratory is immense,” Nylander-French adds. “It’s so important to open students’ eyes to what else is going on in the world, to the interplay between different countries’ regulatory systems and how to bring the best of other cultures home while sharing our best when we travel. We need that perspective to understand where research and practice should go next on a global scale.”