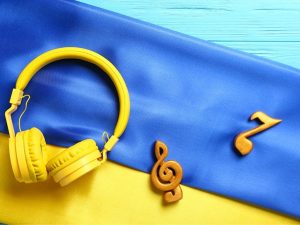 Many of us have been watching the war between Russia and Ukraine unfold in real time. Checking for updates on news sites, reading harrowing and heroic stories, perhaps checking in with friends and family in the affected areas via social media or email. Perhaps even seeking out books, movies, music and other media from Ukraine and Eastern Europe.

Andrea Bohlman, associate professor in the College of Arts & Sciences’ music department, who has a research focus on music in Eastern Europe, though not Ukraine specifically, has provided a helpful list of resources for individuals who want to take time to musically connect to the region. The struggle for sovereignty in Ukraine has a long and complex history, which is not always in the larger discussion of world politics, on the news or in the classroom.

The musical resources below allow us to connect to this region and culture as we all attempt to process and discuss current events. “I would share three points of entry to places currently under attack,” Bohlman said. “I have returned to these over and over the past days to make meaning and to feel a connection.”

Bohlman reports that the project of assembling resources and opportunities to understand the invasion of Ukraine through music and music research is ongoing.

For an introduction, she recommends tuning into a webinar held by Maria Sonevytsky on March 2, now available online: “Understanding the War on Ukraine through Its Musical Culture.” Sonevytsky discusses (and plays) four songs to think about music, politics and history in Ukraine and to provide a deep reflection on imperial power along with racial and cultural diversity within music from Ukraine. The Society for Ethnomusicology has collected resources, including links to talks and projects, that will be updated as the situation unfolds. Further writing and sharing of scores and recordings, is afoot.