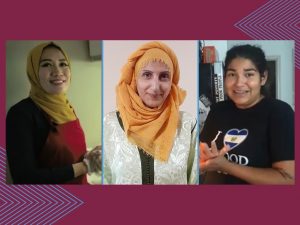 The UNC-Chapel Hill and Duke University area studies centers connected with North Carolina educators in kitchens across the state in three virtual Cultural Kitchen sessions that explored dishes from Latin America, Southeast Asia and North Africa. The series served as a creative program to engage audiences virtually in hands-on learning about area studies and culture.

Throughout July and August 2021, regional experts led cooking sessions while teaching participants about the cultures and histories of the featured world areas. More than 200 educators and community members registered for the series.

Cecilia Polanco ’16 of So Good Pupusas and SEEDS guided educators in the first session on July 27. She demonstrated how to make Salvadoran pupusas, a griddle cake or flatbread made with cornmeal. Polanco noted that she was taught how to make this food staple by her family, including her mother and her sisters, and there was never an exact recipe to follow.

“That’s one of the beautiful things about this process – that it wasn’t about learning and perfecting recipes, it was about watching and doing the work of earning this craft.”

Simple ingredients including corn flour, cheese and sour cream combined to make the griddle cake topped with salsa and curtido, a Salvadoran cabbage and carrot slaw.

“I try to preserve as I learn about pupusas – preserve its history and the origin respectfully,” Polanco said. “Yes, it’s food, and we eat it, but it’s cultural. It’s something very special, and it should be honored and shared, like we’re doing now.”

Polanco is also the founder of So Good Pupusas’ partner non-profit, Pupusas for Education, which awards higher education scholarships for undocumented students.

The session was co-sponsored by Carolina Navigators and the UNC-Duke Consortium in Latin American and Caribbean Studies. A recording of the session is live on the Consortium’s YouTube channel.

Puspita, who led the session live from Jakarta, discussed the role of these dishes as part of religious holiday celebrations. Indonesia is home to the largest Muslim population in the world, and these dishes are typically prepared on the holidays Eid al-Fitr and Eid al-Adha. Meals are shared in big groups with extended families, Puspita explained.

The event was sponsored by the Carolina Asia Center (CAC) and facilitated by Kevin Fogg, CAC associate director and historian of Southeast Asia. Fogg, who lived in Indonesia for seven years, helped translate certain words into English for the participants, and he suggested substitutions for Indonesian ingredients that are sometimes difficult to find in North Carolina, such as galangal (Thai ginger).

On Aug. 5, Samia Touati, founder of Arab Heritage Learning and head of Samia’s Cuisine for a Cause, guided participants in making Moroccan kseksou (couscous) in the last event of the series.

Touati discussed the Moroccan tradition of preparing couscous on Fridays, when family and friends gather around a large clay plate filled with couscous, zucchini, carrots, hummus and more. The Arabic word for Friday, transliterated to jum’ah, means gathering or assembly, Toauti explained.

Like Polanco, Touati did not follow an exact recipe. “Usually I never measure,” Touati laughed. “My eyes [are] my balance.”

She presented a brief history of couscous in North Africa, which dates to before the 13th century, and she explained how couscous varies across the Middle East and North Africa (MENA) region. For example, in Tunisia, couscous is red and spicy, Touati said.

High school teacher Rhonda Taylor appreciated Touati’s enthusiasm in her cooking demonstration. “Both of my daughters have traveled to Morocco, and now, with [Touati’s] energy and detail of presentation – I feel like I can travel there through my kitchen. This was wonderful!”

The session was co-sponsored by the Duke-UNC Consortium for Middle East Studies and the UNC African Studies Center.

Certificates of completion for continuing education units (CEU) were distributed by the area studies centers and consortia to the educators. The UNC area studies centers provide essential services and resources for instruction, learning and research related to global issues, world regions and modern foreign languages.

Participants appreciated the cultural lessons that came with each cooking session, citing the chefs’ deep knowledge of their dishes, which offered insight into their respective cultures.

One participant highlighted the uniqueness of the series for educators.

“[This was] the first time I have had the opportunity to participate in a kitchen experience for teachers. It was a fantastic idea!”

Five of Carolina’s six centers are recognized as National Resource Centers by the U.S. Department of Education, a distinction that places UNC-Chapel Hill first among universities in the Southeast U.S. and sixth among public universities.