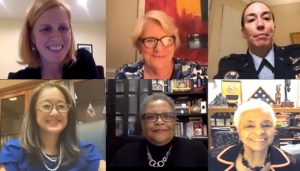 Women have long been underrepresented in key sectors of the United States federal government, particularly in positions of national security leadership, and this is especially true for women of color. In Spring 2021, the area studies centers at the University of North Carolina at Chapel Hill convened a panel conversation with women who have taken on leadership in different parts of the United States government. The panel was hosted in March during Women’s History Month and was designed to provide students with tools for career preparation and advancement.

Panelists discussed their careers, gave advice to those looking to enter the federal government service, considered challenges specific to women in government leadership and discussed strengths that women have brought to federal careers and the opportunities that await them.

Erinn Whitaker, former senior analyst for the Central Intelligence Agency and the U.S. Department of State, teaches in UNC-Chapel Hill’s Curriculum in Peace, War and Defense. She moderated a panel discussion featuring:

“Having spent over 30 years as a foreign service officer at the U.S. Department of State, I must say this panel is near and dear to my heart,” said Barbara Stephenson, vice provost for global affairs and chief global officer at UNC-Chapel Hill and a former U.S. ambassador, during her welcoming remarks. “Serving in the federal government is one of the most high-impact ways to lead and shape our world.”

When it comes to the U.S. Department State, Schoonover noted the progress that has been made since the early 1970s when women foreign service officers were still required to resign if they married. She encouraged students to pursue their true passions, recounting how her decision to leave a job teaching in Washington, D.C., led to a long career as a diplomat.

While more women are now in the foreign service, there is still a lot of room for improvement, said Chung, noting just 20 percent of ambassadors are women. She discussed initiatives her unit at the U.S. Department of State has taken on to recruit talented women foreign service officers into positions of leadership.

Beyond the State Department, women are consistently paving the way for others in the U.S. military. Wilson reflected on women from Carolina’s ROTC program who led the way for her to become an officer in a 24-year military career and others who became leaders in the intelligence community during her time working with Global Security and Innovative Strategies (GSIS).

“There are women coming behind us who will also be making history, blazing trails in parts of our business where we’ve never had women before,” Wilson said. “So we are all, all of us on this panel and those before us, making a way for those coming behind us.”

Col. Martin also noted how women have expanded their presence at the elite service academies, increasing from only 10 percent women in her Air Force Academy class to 30 percent in the 2021 incoming class. She said that this increase improves opportunities for mentorship, something that was important in her career.

“I was lucky in my first flying squadron there were two other female pilots who took me under their wing,” she explained. “They tried to coach me and help me learn from mistakes and missteps they had made, and just offered me their friendship.”

On a similar note, Chung said that seeing other women and other people like herself is always important.

“If you don’t see diversity in your unit, your office, in senior leadership, you feel quite alone,” she said. “So, I think it’s really relevant you see others like you, others like me—an Asian American, an immigrant, a woman—in those settings.”

Wilson told a story from when she served in Korea about being promoted to a leadership position where she would oversee both Korean and American forces, and her commanding officer asked her if she was concerned about taking charge as a Black woman in a different cultural environment.

“I said, ‘Sir, I have no control over the fact that I’m African American and a woman… so if anyone has a problem with those two aspects of me, which are not changing, that is their issue. It’s not my issue,’” Wilson recounted. “’So if you give me the opportunity to lead this team, I will do my best to represent this team, the whole team, as one.’”

The panelists offered practical advice for professional work in the government, such as important soft skills and the value of tracing career paths, being adaptable and talking about issues with work-life balance. “This is especially important in the face of the challenges the coronavirus pandemic has presented,” said Wilson, “We are all in this together.” Wilson continued, “This has been an unbelievable year for all of us, and the best we can do is show kindness.”

Abby Lantz, a 2021 graduate of the TransAtlantic Master’s Program at UNC-Chapel Hill, found the conversation helpful as she begins her career in international affairs. Lantz was grateful to learn more about “the diverse career paths of an exceptional group of women leaders,” who were able to offer students “a transparent, honest and inspirational conversation.”

This event was sponsored by UNC-Chapel Hill’s six area studies centers, which provide services and resources for instruction, learning and research related to global issues, world regions and modern foreign languages. The centers serve the Carolina community by supporting teaching and co-curricular activities on different world regions, and work to prepare students who wish to serve the United States with this specialist knowledge.