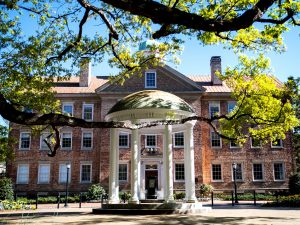 The American Academy of Diplomacy (AAD) and UNC-Chapel Hill are collaborating on the production of The General and the Ambassador, a well-recognized podcast series that focuses on how senior U.S. military leaders partner with senior U.S. ambassadors on national security challenges overseas.

The Office of the Vice Provost for Global Affairs and the College of Arts & Sciences are partnering with the AAD on this project as part of a wider initiative to strengthen UNC-Chapel Hill’s capacity for educating students about the practice and theory of U.S. diplomacy and to expand Carolina’s digital learning platforms. The series covers U.S. engagement in Iraq, Afghanistan, Pakistan, the Horn of Africa, Greece, Russia, Georgia, the Philippines, Japan, South Korea, Haiti, Latin America and more.

Associated programming will be presented as part of Diplomatic Discussions, a series organized by the Office of the Vice Provost for Global Affairs, which brings diplomats and foreign relations experts to UNC-Chapel Hill to discuss important issues in diplomacy and international affairs.

Ambassador Deborah McCarthy, an expert on U.S. foreign and national security policy with over 30 years of diplomatic experience, is the creator of The General and the Ambassador series. Ambassador McCarthy will launch the initiative at Carolina by providing a public talk, ”Russia and the Baltics,” on Monday, March 22 from 4 p.m. to 5 p.m. EDT via Zoom.

“We promised in Carolina Next to bring global thought leaders to campus and to enhance the global branding of UNC. This new partnership with the American Academy of Diplomacy enables us to do both,” said Barbara Stephenson, vice provost for global affairs and chief global officer at UNC-Chapel Hill and former U.S. ambassador. “I am honored to host Ambassador Deborah McCarthy at The General and the Ambassador launch event, and I look forward to collaborating with her and my friends at the American Academy of Diplomacy to build out the study of diplomacy at UNC.”

To advance this initiative, the College of Arts & Sciences is making several Enhancing Digital International Learning Awards available to support the creation of programming related to The General and the Ambassador. Faculty members and departments whose work is integrally tied to the analysis of global issues can use these awards to incorporate the podcast content into course curricula and other student activities.

Programming related to The General and the Ambassador and integration with UNC-Chapel Hill courses will position Carolina faculty and departments to become part of a learning community that will influence the content of podcast episodes produced in the spring and summer of 2021.

“Diplomacy affects Americans from wars to consumer prices but what really goes on in diplomacy, what the work is like, is a mystery to most. I’m delighted that our partnership with the University of North Carolina at Chapel Hill aids our joint mission of education and understanding,” said Ambassador Ronald Neumann, president of the American Academy of Diplomacy and former U.S. ambassador to Algeria, Bahrain and Afghanistan.

The American Academy of Diplomacy is an independent, non-profit association of over 300 former senior U.S. ambassadors and high-level government officials who have served with distinction in international affairs. The Academy’s mission is to strengthen American diplomacy through outreach programs, awards, podcasts, research, and public discussions.

Learn more about the podcast series by visiting The General and the Ambassador series website.