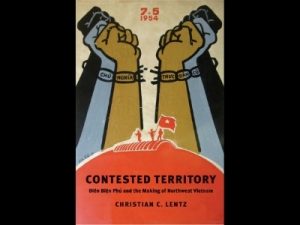 Cover of Contested Territory based on artwork by Duc Hoa (1984).

Christian Lentz, associate professor of geography at the University of North Carolina at Chapel Hill, was recently awarded the Harry J. Benda Prize from the Association for Asian Studies (AAS) for his first book, “Contested Territory: Ðien Biên Phu and the Making of Northwest Vietnam.” The Benda Prize is awarded annually to a scholar from any discipline of Southeast Asian Studies for their first book in the field.

“The Benda means a lot to me because it comes from my scholarly peers in the interdisciplinary field of Southeast Asian Studies,” Lentz said. “Further, this recognition makes me feel like I have given a small bit back to the many talented scholars who taught me.”

In the book, Lentz explores the 1954 battle of Ðien Biên Phu, where French colonial forces were defeated by the Democratic Republic of Vietnam (DRV). This marked the end of the French empire in modern Vietnam, as well as Cambodia and Laos. Lentz expands his analysis of the battle to include the encompassing Black River region and a longer time frame, from 1945 to 1960, thus contextualizing a significant moment in world history.

In dialog with geographic theory, he presents the concept of territory as a contingent product of power relations, as well as a governing project and ongoing social process. He argues the battle over Ðien Biên Phu involved not just fighting on the battlefield, but an effort by the communist DRV throughout the 1950s to incorporate the region into their construction of Vietnam as a nation-state. In Lentz’s book, territorial construction is a strategic form of rule. These struggles over defining territory, he says, have implications for projects to develop the Black River region later in the century, such as dam projects which have had a tremendous impact on those who long relied on the Black River and its tributaries for their way of life.

“We are proud but not surprised that Professor Lentz has won this recognition of his excellent first book,” said Ji-Yeon Jo, director of the Carolina Asia Center. “This kind of scholarship—firmly rooted in fieldwork in Asia, with deep analysis in the regional languages and attention to local concerns at the heart of global issues—is an example of why UNC’s profile in Asian studies is growing, particularly in connection with Southeast Asia.”

Lentz’s work focuses broadly on Southeast Asia’s politics, society and environment by focusing on nationalism, state formation and agrarian political economy. He has been a professor in the Department of Geography at UNC-Chapel Hill since 2011 and served as interim director of the Carolina Asia Center in Spring 2020.

The Association for Asian Studies is a scholarly, non-political, nonprofit professional association open to all persons interested in the study of Asia.