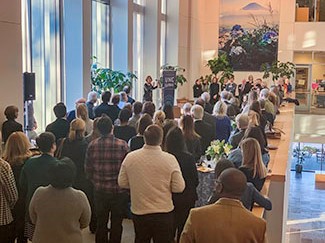 UNC Global hosted a celebration for Carol L. Folt, the 11th Chancellor of the University of North Carolina at Chapel Hill, on Monday, January 28, 2019 at the FedEx Global Education Center. Her last day of service as chancellor is January 31, 2019. Throughout her tenure, Folt has been instrumental in advancing Carolina’s global mission.

Raymond Farrow, associate provost for global affairs and interim chief global officer at UNC-Chapel Hill, delivered opening remarks and reflected on Folt’s role as UNC-Chapel Hill’s first “global chancellor.” He also reflected on the many first achievements by women throughout the University’s history, noting that the University has become more inclusive over the years, from the decision to make Carolina a fully coeducational institution in 1963 to the appointment of its first female Chancellor, Carol L. Folt, in 2013. He praised Folt’s commitment to making the campus a more inclusive environment. Farrow acknowledged that, under Folt’s leadership, the University became more deeply committed to multiculturalism and global inclusivity, marking UNC-Chapel Hill’s rise as a leading global public research university.

Folt championed global initiatives during her six years at Carolina and made “Adopting a Global Mindset” a crosscutting imperative of the Blueprint for Next, the University’s strategic framework. She established new global leadership positions at Carolina, including the position of vice provost for global affairs and chief global officer. The search for the position, which is supported by a recent $10 million gift from Bill and Anne Harrison, is currently underway. Folt also pushed to realize a “Global Guarantee” for all Carolina students and established a Chancellor’s Global Education Fund to help meet that goal. Under her leadership, the University’s ranking among world universities increased from 43rd in 2013 to 30th in 2018, according to the Shanghai Ranking Consultancy’s Academic Ranking of World Universities.

Following Farrow’s remarks, Chancellor Folt spoke fondly of her work with UNC Global. Reflecting on her upbringing in an immigrant family, she emphasized that there is “no difference between global and local.” During her time as chancellor, she said, she traveled to four continents to expand Carolina’s global efforts, including visits to Malawi, Ecuador, Sweden and Singapore. She emphasized the great opportunity ahead for Carolina to impact communities throughout the world.

“Chancellor Folt has not only elevated the UNC’s global profile, she has fundamentally altered the institution’s trajectory,” said Farrow. “We will miss her devotion and passion to the cause of increasing UNC’s global impact and reach.”