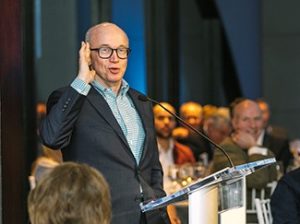 The University of North Carolina at Chapel Hill hosted a meeting for more than 120 members and guests of the Chancellor’s Global Leadership Council in New York City, May 2–3, 2019. Established in 2016, the council is a pan-university network of alumni who are committed to supporting UNC’s aspiration to be a leading global public university. Members represent a diversity of UNC schools and backgrounds and have traveled from Singapore, Hong Kong, London, Switzerland, Canada, California, and other points in between.

The council meets biannually and focuses on advocacy for the University’s top global priorities, such as A Global Mindset, one of four signature initiative funding priorities for the Campaign for Carolina, which launched in October 2017.

The spring 2019 meeting was held at the Asia Society and Museum, which was founded in 1956 and promotes understanding and partnerships among peoples, leaders and institutions of Asia and the United States. The Asia Society regularly hosts lectures, conferences, performances and meetings. The gathering at the society’s headquarters offered alumni and friends an opportunity to hear about and discuss Carolina’s global activity.

On May 2, the University announced a $14 million grant from the Bill and Melinda Gates Foundation for global women’s health researchers in UNC School of Medicine and UNC Gillings School of Global Public Health to conduct two studies designed to improve pregnancy outcomes in the world’s poorest countries. Jeff Stringer, professor of obstetrics and gynecology and director of the UNC Global Women’s Health project, gave a talk about the studies, which will explore the role of technology in predicting and addressing key risk factors associated with pregnancy, labor and delivery.

In his presentation to the Global Leadership Council, Interim Chancellor Kevin Guskiewicz reinforced his commitment to enhancing Carolina’s global priorities and strategic initiatives. He discussed the University’s interest in implementing and strengthening a Global Guarantee for all students and enhancing a global mindset among all members of the Carolina Community.

“Council members have been longstanding supporters of international activity and study abroad at Carolina, and we are fortunate to have their support and collaboration during this next stage of growth in Carolina’s global activity,” said Raymond B. Farrow III, associate provost for global affairs and interim chief international officer.

Don Kanak ’75 serves as chair of the Chancellor’s Global Leadership Council. Kanak is chairman of Eastspring Investments, the Asia-focused asset management business of Prudential, Plc (UK). He is also a senior fellow of the Harvard Law School Program on International Finance Systems, chairman of the EU-ASEAN Business Council and a member of the Council on Foreign Relations.

Both the Carolina Arts Leadership Council, which is the advisory board for the UNC Arts Everywhere initiative, and the Chancellor’s Global Leadership Council were meeting in New York during the same week, providing the opportunity for a co-sponsored performance and panel discussion.

The UNC Arts Everywhere performance featured composer and trumpeter Amir ElSaffar in discussion with Emil Kang, executive director of Carolina Performing Arts. In addition to their discussion, ElSaffar performed solo and also with an ensemble including Hamid Al-Saadi, Dena ElSaffar, Tim More and Ole Mathisen. “The performance blended ancient and more contemporary music traditions across cultures and was a special highlight of the program. The arts play such a critical role in introducing the Carolina community to the world,” said Farrow.

The next Chancellor’s Global Leadership Council meeting will take place this coming September in Chapel Hill.