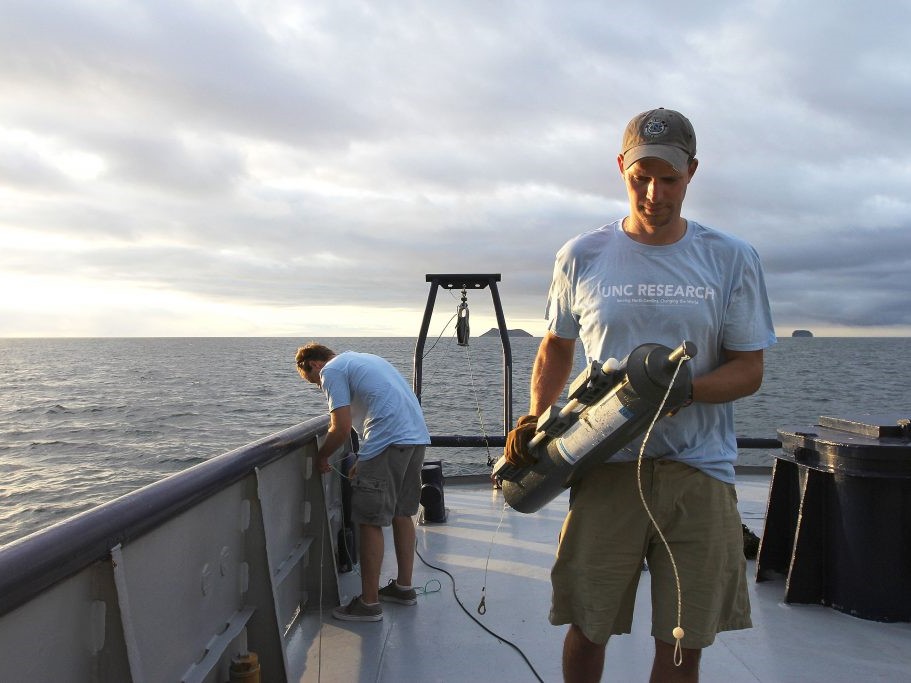 If ecotourism in the Galápagos Islands—a province of Ecuador 1,000 kilometers from the mainland—continues to match its growth rate of the past two decades, the renowned sea turtles, giant tortoises, marine iguanas and unique landscapes that help attract visitors face serious risks.

That’s among the scenarios developed by researchers at the University of North Carolina at Chapel Hill Center for Galápagos Studies and the joint UNC-Universidad San Francisco de Quito (USFQ) Galápagos Science Center as part of a new effort to help Ecuador government officials plan for the future as they aim to balance economic development and resource conservation in a World Heritage site.

A new paper describing the research team’s models forecasting potential outcomes appears in the Oct. 10 issue of the Proceedings of the National Academy of Sciences.

More than 225,000 people visited the Galápagos in 2015, and the residential population has grown to about 30,000 as people flock to the island for higher wages in the booming ecotourism economy.

In an effort to sustainably develop and manage growth, the Ecuador government asked Steve Walsh of UNC and Carlos Mena of USFQ, co-directors of the Galápagos Science Center, to generate scenarios of change reflecting the number of tourists and residents that the islands could accommodate before they start to lose their luster.

The resulting models drew from several representations of Galápagos society, human-environment interactions and how people function within both human and natural systems. For example, Walsh and Mena pulled data from multiple demographic, tourist, economic and environmental sources for analysis through computer modeling to predict how much growth the islands can sustain by 2033.

“The Ecuadorian government and the Galápagos National Park are asking the exact right questions,” said Walsh, the Lyle V. Jones Distinguished Professor of Geography at UNC-Chapel Hill. “No one wants a boom and bust situation. We want wise, managed growth within the concept of sustainability.”

Although the focus of the research was on the Galápagos, Walsh said he wanted to refine the models to study human-environment interactions affected by social and ecological forces and factors originating in the islands and beyond their shores.

“Our modeling is an attempt to help guide wise stewardship of a special place, and I think the models give us the opportunity to create a computerized natural laboratory to test scenarios of change,” he said. “As we build these models, the notion is to understand the Galápagos and to export them to similarly challenged places around the globe.”

The goal of the study and the models is not to tell governments what to do, but to help them make more informed decisions about the sustainability of island ecosystems and future threats.

“We see our models as tools for decision-makers that can help them understand and evaluate the value of special places and the risks they’re willing to tolerate,” said Walsh. “Our models allow decision- makers to look at scenarios of change and to choose what best matches their management goals and their sense of value and risk.”

Using models to simulate behavior and feedback between people and the environment always has some uncertainty, he said. Researchers used real data, computed actual functions that linked variables and social and ecological processes, and performed analyses to determine the degree of uncertainty in their findings.

“We’re not simulating data. We’re not making up data. We’re not using theory to guide it,” said Walsh. “It’s real data and real functions, and that improves the performance of the models.”

The Galápagos Science Center is a joint effort between UNC-Chapel Hill and the Universidad San Francisco de Quito. The two universities built a research facility in 2011 on San Cristóbal Island to promote science and education that will help protect the fragile island ecosystems and enhance the lives of their inhabitants. The facility is being used by UNC and USFQ faculty and students conducting research on the Galápagos Archipelago in association with the Galápagos National Park. UNC students use the facilities for study abroad experiences and to support their work on undergraduate, graduate and doctoral theses and dissertations.

The facility houses four laboratories focusing on terrestrial ecology, marine ecology, geospatial technologies, microbiology and genetics. With a permanent staff, field measurement equipment and several permitted projects that extend across the sciences, the Galápagos initatives focus on population, health and environment through a focus on understanding the complex interactions among the social, terrestrial and marine systems of the Galápagos islands.