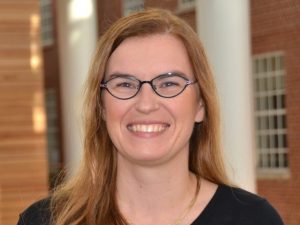 When pregnant women are depressed, how important is it that they receive therapy? A first-of-its-kind study found outsize positive effects on mothers’ mental health, financial status and parenting skills even seven years after the birth of their child — and the results could lead to big changes in global public policy.

Joanna Maselko, was a co-author of the study, which was published in the journal American Economic Review. She is an associate professor of epidemiology at the UNC Gillings School of Global Public Health, where she studies the mechanisms through which social environments shape people’s risk for common mental disorders.

With an international team of colleagues, Maselko researched the long-term benefits of cognitive behavioral therapy (CBT), a kind of talk therapy that focuses on changing thinking patterns to help cope with difficult situations. Previous studies have highlighted the short-term benefits of CBT, but this is the first study to address whether the approach has long-term effects.

Major Depressive Disorder affects an estimated 13% of the world’s population. Women are about twice as likely as men to be depressed, and women of child-bearing age are at especially high risk due to depression before and after a baby is born.

That’s why Maselko and her team chose to study pregnant women. In one of the largest randomized control trials ever run in the developing world, they followed women from 40 communities in Pakistan who had been diagnosed with depression mid-pregnancy.

When the researchers followed up after a year, more than half of the women in the control group were still depressed, but only a quarter of the mothers who received CBT reported depression.

Checking in seven years later, the researchers found that women who received treatment were still much less likely to be depressed than those in the control group. They also were more likely to have jobs, control their household spending and invest energy in positive interactions with their children — especially girl children.

The research team also found that women who had the least social support, such as those who were not living with or near their mother or mother-in-law, benefited most from therapy.

Read more about this study in The Guardian and The Economist.