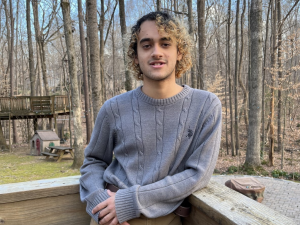 Bradley Sadowsky ’24, a math and comparative literature major, has been awarded the 2022 Southeast Conference of the Association for Asian Studies (SEC-AAS) Annual Undergraduate Prize for Best Paper. SEC-AAS is a nonprofit scholarly organization dedicated to promoting the study of Asia in the southeastern region of the United States. Nominees for the SEC-AAS award come from 11 states in the southeast region of the U.S. and Washington, D.C.

Sadowsky’s paper explores themes of westernization, globalization and class in the novel “The Sailor Who Fell from Grace with the Sea.” The paper was originally written for a Fall 2021 class, HIST 134: Modern East Asia, which surveys developments in China, Japan and Korea since the late 19th century.

The novel that forms the basis of the award-winning paper was written by the controversial Japanese author and political activist Mishima Yukio in 1963. Sadowsky carefully considers Mishima’s own sociopolitical views and contradictory life, which fueled the themes of the novel. While Asian studies is not their academic area of focus, Sadowsky emphasizes the importance of becoming familiar with the thematic area.

“Given [Asian studies’] importance to our world today, not knowing about such a large region of the world would be an insurmountable roadblock to any attempts at understanding the modern world and contemporary global culture,” Sadowsky said.

“Furthermore, as the birthplace for millennia of such a wealth of influential literature, I personally feel that anyone who wishes to explore literature as a universal human experience has an obligation to acquaint themselves thoroughly with Asian history and culture.”

Sadowsky’s academic success as the winner of the 2022 SEC-AAS Undergraduate Paper Prize continues a Carolina tradition of excellence in Asian studies. Kevin Fogg, associate director of the Carolina Asia Center, said of Sadowsky’s award, “This shows the insights that our students are able to draw on Asia from the high-level instruction they are receiving at Carolina.”

Carolina has the largest Asian language program in the southeast U.S. and the only Title VI–funded Asia center in the region, the Carolina Asia Center. The University has also established a new graduate program in Asian and Middle Eastern studies. The center and new programs advance UNC-Chapel Hill’s strategic goal in Carolina Next to strengthen global partnerships and bring the world to Carolina with enhanced on-campus global programming. Asia-related programming and languages are currently a top priority under this strategic goal.

Li-ling Hsiao, associate professor in the Department of Asian and Middle Eastern Studies and associate dean for First-Year Curricula, has long served as the organization’s secretary-treasurer, and this January (after Sadowsky won the student paper prize), Fogg was elected as the interim president of the organization for 2022.

This regional group operates under the auspices of the Association for Asian Studies, the largest scholarly organization for persons interested in the study of Asia.