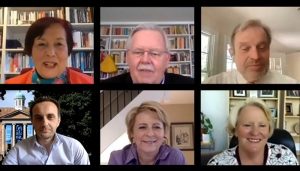 On April 20, the University of North Carolina at Chapel Hill hosted Ambassador John Tefft, U.S. ambassador to the Russian Federation from 2014-2017, for an expert talk on the current state of affairs in Russia and prospects for U.S.-Russia relations under the Biden administration. After the public talk, Tefft joined students for a follow-up discussion on his remarks as well as his esteemed career in diplomacy.

Ambassador Deborah McCarthy, senior fellow at Harvard University and member of the board of directors at the American Academy of Diplomacy, and Ambassador Barbara Stephenson, vice provost for global affairs at UNC-Chapel Hill, provided introductory remarks.

Tefft contextualized the state of play in Russia’s internal affairs. He focused on growing disillusionment  among young people, and a lagging economy with declining standards of living.

“Numerous Russian observers have noted that the young people at the pro-Navalny rallies over the last two months are more than just educated liberal students and activists in Moscow and Petersburg,” Tefft said, referring to the opposition leader Alexei Navalny. “You see a broader cross section of young people in the society turning out.”

Tefft identified a bad business climate and corruption as major contributors to Russia’s poor economy, two-thirds of which he said is estimated to now be under state control. Another major trend he identified was Russian President Valdimir Putin’s continuation of what Tefft called “post-imperial policies.”

“There’s no recognition yet among these people [Putin’s advisors] that trying to run a 19th century imperial policy abroad is not very consistent with building a successful 21st century global economic power,” he said.

He also discussed the Biden administration’s handling of Russia thus far and expectations for relations between the two countries moving forward. Tefft noted the tough stance the Biden administration has taken on issues like Russian threats to Ukraine and the Solar Winds hack, while also looking for areas to engage with Russia on strategic stability talks, and perhaps other issues such as Arctic policy and a new agreement to block Iran from developing nuclear weapons.

“It seems to me that we now have the essence of the emerging Biden policy towards Russia: a readiness to engage with Russia and promote greater strategic stability,” while firmly adhering to matters of principle regarding human rights and Ukraine’s territorial integrity, he explained.

Following Tefft’s talk, he was joined by Robert (Bob) Jenkins, teaching professor in the Department of Political Science, who moderated a panel discussion with Christiane Lemke, professor of political science and director of international relations and European studies at Leibniz University Hannover. Lemke is also a visiting scholar at UNC-Chapel Hill’s Center for European Studies. Adnan (Adi) Džumhur, associate director of the Center for Slavic, Eurasian and East European Studies, helped facilitate the panel discussion in collaboration with Jenkins.

Lemke discussed the European perspective on Russia and particularly on Germany’s shift away from a focus on economic relations with Russia. She also noted Germany’s interests in human rights, finding a common European approach and stronger coordination with the United States.

“What will the future look like? I think one of the important points that we really need to address is how can the U.S. and the EU work closer together and coordinate policies,” Lemke said. She believes Russia could be included in areas like fighting climate change and de-escalation of military confrontation.

In his remarks, Jenkins added he thought Russia’s behavior in the last 10 years had galvanized NATO in increasing its security capabilities. The panelists then fielded questions from the virtual audience.

After the public talk concluded, Tefft joined Jenkins’ class POLI 459, Transatlantic Security, to take questions and discuss his remarks directly with students. Tefft spoke about his experiences with the Russian public as an ambassador as well as his career in the foreign service, and he shared advice for those looking to enter a career in diplomacy.

Carolina’s Vice Provost for Global Affairs Barbara Stephenson highlighted the importance of the event for students who will become future leaders in foreign affairs.

“By creating opportunities for students to engage with foreign affairs practitioners like Ambassador Tefft, we want to highlight the achievements and the meaningful careers that await students who take full advantage of Carolina’s language and area studies strengths,” Stephenson said.

Ambassador Tefft’s expert talk was presented as part of Diplomatic Discussions, a series organized by the Office of the Vice Provost for Global Affairs, which brings diplomats and foreign relations practitioners to UNC-Chapel Hill to discuss important issues in diplomacy and international affairs.

View a video of Ambassador Tefft’s expert talk on online.