Maital Guttman (MBA ’13) has always had an activist spirit.

After finishing her undergraduate degree at Duke University, she founded her documentary film company, producing awareness and fundraising videos for nonprofits. Based in Los Angeles, she managed global distribution and financing and produced more than 30 videos, that took her to Israel, Moldova, Poland and Ethiopia. In South Africa, she worked on a documentary about how art therapy was being used to help children impacted by HIV.

“I stumbled into film as an incredibly powerful tool on the individual level, but I was trying to envision what it looks like to make change on a bigger scale,” she says.

“After talking with a couple of mentors, it became clear to me that business school would be a great place to go and expand my toolkit for making an impact.”

Now, Guttman heads diversity, equity and inclusion (DEI) for Europe at McKinsey & Co. She joined the firm in Atlanta, after she graduated from Carolina, and in 2021 relocated to Tel Aviv with her wife and two sons.

She’s making change on a scale she never would have expected, and she credits her MBA experience at UNC Kenan-Flagler.

A business school with values

Guttman was born in Israel – her first name means dew drops – and grew up in Greensboro, North Carolina. Her love for the area drew her back for graduate school.

“Chapel Hill is such a wonderful town,” she says. “It’s fun, it’s affordable, it’s beautiful – there are great people and great food.”

But a beautiful setting wasn’t enough: Guttman wanted a business school with strong core values, and this was what drew her to UNC Kenan-Flagler.

“I felt there was a real emphasis on leadership and teamwork,” she says.

“That was what I wanted out of a business school,” Guttman says. “To become a better leader, a better team player, and those are UNC Kenan-Flagler values.”

Add to this the fact that the School selected her as a Dean’s Fellow and awarded her a premier fellowship, the Peter G.C. Mallinson MBA Fellowship, and the choice was a no-brainer. She also was a Forté Fellow.

Equipped to have business conversations

Coming from a non-traditional background, Guttman wasn’t sure what to expect when she arrived on campus.

“I had an image of what business school would look and feel like,” she says, “but I was surprised by how well I clicked with people. 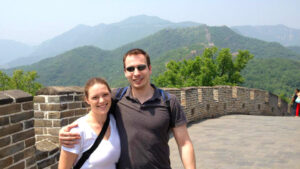 “There was just such an emphasis on collaboration, and I really appreciated how it equipped me to have business-level conversations even though I came from a non-traditional background.”

Guttman cites the Analytical Skills Workshop as a particular highlight, giving her the analytical grounding and confidence to thrive in the MBA program. She soon found that far from holding her back from connecting with her peers, her non-traditional background was an advantage. In fact, she had more in common with her classmates than she anticipated.

“Absolutely a highlight of my time was a capstone course on sustainability,” Guttman says. “I got to spend time with people who had very similar passions to me.” The class went to Ethiopia for two weeks to apply the consulting skills they’d been working on.

“It was such a wonderful way of experiencing making sustainable impact and change on a bigger level,” she says. “I remember learning a ton but also laughing every day – it was probably one of my favorite experiences of my life.”