Using Neuroscience to Help Others 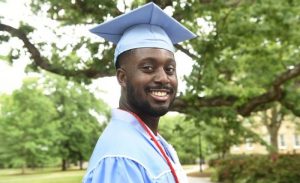 Daniel Ogunbamowo, pictured near the Old Well, will head to the Stanford Social Neuroscience Lab after graduation to take a full-time job as a research assistant. (photo by Donn Young)

Daniel Ogunbamowo, once at risk of flunking out of school, turned his life around, got accepted to Carolina on a Morehead-Cain Scholarship and has continued to seize every opportunity since.

Senior Daniel Ogunbamowo’s journey to Carolina was a long one, not just measured in miles. He grew up in London and Essex, raised by a single mom — a Nigerian immigrant who worked two jobs before he was born so she could send money back home.

“My mom is one of the toughest and most resilient people I know. She’s a huge inspiration,” he said. “She attended university while working full time once my older sister was born and she was pregnant with me. She was always trying to get us the best education we possibly could.”

Despite his mother’s insistence that education be a top priority, Ogunbamowo said he was not a good student and for a while was at risk of failing. Eventually, he turned his grades around.

With help from the Sutton Trust, which supports young people from less advantaged backgrounds in gaining access to leading universities, Ogunbamowo came to UNC-Chapel Hill on a Morehead-Cain Scholarship. The Honors Carolina student has also made the Dean’s List for multiple semesters, and he received a Phillips Ambassadors Scholarship to study in Hong Kong.

Ogunbamowo had always been interested in history and was initially an economics major. But a light bulb went off his senior year in an upper-level neuroscience course on emotions, taught by Kristen Lindquist, associate professor of psychology and neuroscience. He created his own major — neuropsychology — through the interdisciplinary studies program and paired it with another major in political science and a minor in neuroscience. He has also conducted research in psychiatry labs through the UNC School of Medicine.

“I was always an empathetic kid, but in studying income inequality and poverty and the dynamics of capitalism, I was learning more about the life I had lived,” he said. “When you’re at the lowest end of the social ladder, mental health concerns are a daily part of life. And there are so many chronic illnesses linked to stress and stress physiology. I realized how much social neuroscience influences our everyday state of mind and state of being.”

After graduation, Ogunbamowo hopes to take a cross-country road trip before starting a new full-time position as a research assistant in the Stanford Social Neuroscience Lab. In the future, he plans to pursue a Ph.D. in affective neuroscience.

Ogunbamowo had an opportunity to return to London from May to August 2019 as a history research assistant at the University of Oxford and as an intern with British Parliament. At Parliament, he drafted recommendations to senior government officials on health policy and Britain’s stance on the Israeli-Palestinian conflict.

In August of that year, he headed to the University of Hong Kong for research on Chinese history and Hong Kong’s political turmoil. He found himself in the midst of political turmoil when anti-government protests began nearby.

“Despite all of the unrest, Hong Kong was a special time for me personally,” Ogunbamowo said. “I never would have had all of these experiences, and now I am graduating from a great university. I think it will take awhile to believe it.”

He has left his mark on the local community as well, volunteering for Kitchen Patrol, a partnership between Lantern Restaurant and the Sonja Haynes Stone Center for Black Culture and History that teaches cooking classes to underserved elementary school students.

He worked with Church World Service to mentor a Congolese refugee who was a student at Durham Tech; his mentee later transferred to Carolina on a full-ride scholarship and will also graduate in May.

And since spring of his first year, Ogunbamowo has been a part of Chapel Hill Players, a sketch comedy and improv group. The troupe had its final performance a couple of weeks ago in Forest Theatre.

“As I’ve studied neuroscience, I’ve found there are some connections there,” he said. “Listening to your partner is one of the major rules of improv. I was also reading a paper about how watching theater can make you more empathetic.”

In reflecting on his Carolina career, Ogunbamowo said his short-and-sweet message to fellow seniors would simply be “We really did that.”

“It was challenging and really amazing in so many ways. We made it through COVID-19 and the trials and tribulations of our college experiences. We did it.”