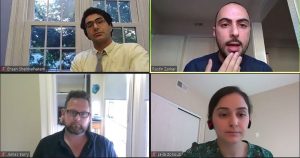 Panelists Leila Zonouzi, James Barry, and Ehsan Sheikhalharam participate in a panel discussion on “Love and Desire Across borders in Modern Iran and Diaspora” on Sept. 5, moderated by Rustin Zarkar.

The Persian Studies program at the University of North Carolina at Chapel Hill recently hosted a virtual symposium entitled “Revisiting Discourses of Love, Sex, and Desire in Modern Iran and the Diaspora.” Originally scheduled as a one-day, in-person symposium in March 2020, the event was re-imagined as a series of virtual panels that took place between Sept. 5 and Oct. 3. The symposium promoted nuanced discussion around love and desire in modern Iran. The virtual format enabled attendees from around the world to participate; over 200 people registered for each panel.

Throughout the series, the symposium gathered a range of scholars with diverse perspectives to analyze how love and desire have been represented, imagined and discursively constructed. The symposium featured a keynote by Janet Afary, Mellichamp Chair in Global Religion and Modernity at the University of California, Santa Barbara (UC, Santa Barbara), who presented her co-authored paper, “The Growing Popularity of Non-Standard Marriages and Unions in Iran and South West Asia/North Africa.” Afary, along with the many other contributors, illustrated that desire is undoubtedly one of the most important theoretical topics for scholars of modern Iran. The topics of love and desire were addressed through numerous lenses, including its manifestations in literature, filmography, sociology, anthropology, history and women’s studies.

This event was organized by Claudia Yaghoobi, Roshan Institute Associate Professor in Persian Studies at UNC-Chapel Hill. “This symposium was an attempt to address some of the most recent trends and urgent matters in the field of Iranian women’s, gender and sexuality studies,” Yaghoobi explained. “While the sublime forms of love and desire represented in the classical poetry of Hafez and Rumi have played a central role in forming the discourses around love in Iranian literature and culture, it is time to also engage the contemporary trends and interpretations of love and desire practiced in real life and represented in Iranian cultural productions.”

During the symposium, four papers were awarded the Ferdowsi Tusi Award in Persian Literature and Culture, an annual prize awarded to graduate students producing innovating new research in the field of Persian studies. The award is made possible by an anonymous family from the Iranian community of North Carolina, and it is presented jointly by Carolina’s University Libraries and Persian Studies program. The 2020 awards were presented to the following students:

Throughout all five webinars during the symposium, robust discussion followed the paper presentations in which participants asked the panelists about a wide range of topics hoping to learn more about the societal norms of love and desire in modern Iran. Selected works from the symposium will be published as part of the book series, “Sex, Marriage, and Family in the Middle East,” edited by Afary and Yaghoobi. Other selected papers will appear as a special issue in the Journal of Middle East Women’s Studies.

Recordings of the events, which have reached thousands of views, are available on the Persian Studies at UNC Facebook Page and the UNC Center for Middle East and Islamic Studies YouTube Channel.