Home / News Stories / What Is Sanitation’s Role in Prevention of Intestinal Disease in Children?

What Is Sanitation’s Role in Prevention of Intestinal Disease in Children? 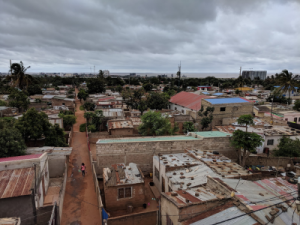 A person walks through an informal community in Maputo, Mozambique.

In rapidly growing cities of sub-Saharan Africa, informal communities – sometimes referred to as “slums” – lack access to many critical infrastructure needs, including sanitation and protection from exposure to human waste. This puts communities, especially children, at risk of poor health.

A recent study co-authored by researchers at the UNC Gillings School of Global Public Health examined whether radical improvements in sanitation could reduce the chances that children in these settlements develop intestinal infections, diarrhea and long-term health effects. They found, however, that the risk of infection is so high that sanitation improvements alone may not be enough to significantly improve health.

Published in eLife, the study was a collaboration between the Gillings School, the Instituto Nacional de Saúde in Mozambique, the London School of Hygiene and Tropical Medicine, the Georgia Institute of Technology, and the non-governmental organization Water and Sanitation for the Urban Poor (WSUP). Co-authors from the Gillings School include Associate Professor Joe Brown; Drew Capone; Emeritus Professor of Practice Pete Kolsky; and Philip Singer Distinguished Professor Jill Stewart, in the Department of Environmental Sciences and Engineering; as well as David Holcomb, in the Departments of Epidemiology and Environmental Sciences and Engineering.

In what was the first controlled health impact trial of non-sewerage urban sanitation in low-income countries, the study team evaluated new shared sanitation facilities installed by WSUP – which included flush toilets, septic tanks and hand wash stations – in a cohort of communities in Maputo, Mozambique. Between 2015 and 2018, the study analyzed stool samples from children under age five in this cohort and compared them to samples from children in a cohort without sanitation facilities to determine the prevalence of pathogens that cause intestinal infection.

“Sewerage has been the subject of a handful of trials,” Brown explained. “In this setting and many others like it, sewerage is not feasible due to cost. So, this is the first onsite or ‘non-sewerage’ urban sanitation trial, which involved latrines serving clusters of homes with onsite management of the waste.”

The team also revisited or enrolled new children 12 and 24 months after the initial trial to compare their stool samples to the baseline findings.

“We noticed that exposures to enteric pathogens were common in early childhood and that potential for infection is elevated in the informal urban communities we studied,” said Brown. “Although sanitation coverage was previously high and most households had access to high-quality piped drinking water, analysis of stool samples revealed that exposure to enteric pathogens was very common. What we know about the high prevalence of gut pathogens in Maputo is consistent with an emerging body of research in low- and middle-income countries, albeit primarily from rural areas: in endemic settings, sanitation-related pathogens are commonly found in children, even if they are asymptomatic.”

Study findings revealed that, before installing the new sanitation facilities, more than 50 percent of children in Maputo were exposed to at least one intestinal pathogen by their first birthday. But despite having access to WSUP’s high-quality sanitation facilities, the team found that young children in the study cohort still maintained a consistently high prevalence of many enteric pathogens.

“What this study tells us is that exposures are very common in this setting, and more transformative infrastructure is needed to completely control transmission of gut infections,” said Brown. “It also strongly suggests that having effective sanitation in very early childhood can be protective against some common infections. This is important because infections in infancy can result in long-term health effects and carry a greater risk of severe illness and even death.”

While the study ultimately found that even high-quality facilities in areas lacking sanitation infrastructure may not effectively limit transmission of intestinal infections, it also found that improvements in sanitation could potentially disrupt exposure or transmission of pathogens in young children if the facilities are present from birth. This underscores the importance of learning more about sanitation’s impact on health in these youngest populations.

The team has received further funding from the Bill and Melinda Gates Foundation to study the effects of better sanitation in Maputo on children’s health and development, with a focus on early childhood exposures. This work will help build the case for investment in the long-term benefits of better infrastructure to support health and well-being.