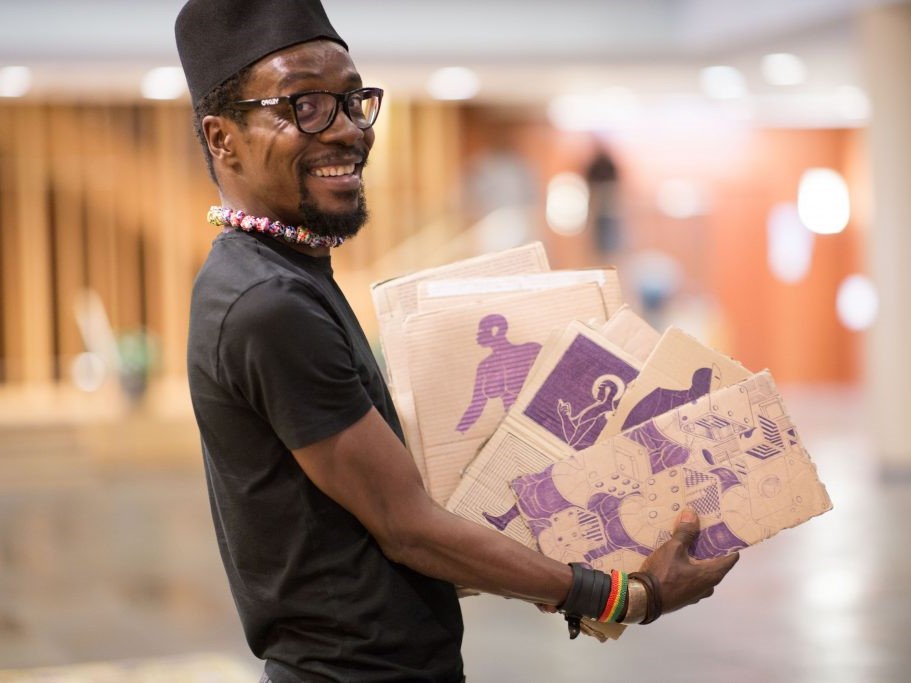 World-renowned graphic novelist and political cartoonist Ramón Nsé Esono Ebalé visited the FedEx Global Education Center at the University of North Carolina at Chapel Hill on Tuesday, September 24, 2019 to celebrate and speak about his exhibition, The Art of Resistance.

For over a decade, Esono Ebalé has been creating artwork that openly criticizes the long-ruling, oppressive government of his native Equatorial Guinea. After living in exile from 2011 to 2017, Esono Ebalé was falsely imprisoned at the notorious Black Beach prison after returning home in September 2017 to renew his passport. Artists around the world called for his release using social media and the hashtag #FreeNseRamon, which inspired many to create their own art in support of Esono Ebalé, eventually culminating in his release in March 2018.

The Art of Resistance features work created by Esono Ebalé prior to and during his imprisonment as well as from those who participated in the #FreeNseRamon movement. Esono Ebalé also created new original art during a visit to UNC-Chapel Hill over the summer for the exhibition.

Prior to the reception, Esono Ebalé and Tutu Alicante, executive director of EG Justice, led a Spanish and English dual-language guided tour throughout the FedEx Global Education Center to discuss the context and themes of The Art of Resistance pieces on display. Esono Ebalé also explained how his experiences growing up in Equatorial Guinea and his imprisonment shaped his art during the tour. An additional tour of the exhibition was offered after the panel discussion.

The official programming opened with the live performance by the artist, which included spoken word and song. Alicante accompanied him with a drum. Katie Bowler Young, the director of UNC Global Relations, provided welcoming remarks and thanked Esono Ebalé for bringing his work to Chapel Hill. Emily Burrill, director of the African Studies Center and associate professor in the Department of Women’s and Gender Studies and the Department of History at UNC-Chapel Hill, then facilitated a discussion with Esono Ebalé and Alicante about the exhibition.

Esono Ebalé detailed his experience while imprisoned in Black Beach and how art was his weapon of choice during his imprisonment. Some of the artwork he was permitted to create during his detainment was displayed below the stage throughout the discussion. Esono Ebalé also expressed concern for refugees, immigrants and migrants throughout the world. Esono Ebalé stated that “…injustice anywhere is a threat to justice everywhere.”

Throughout the fall semester guests connected to #FreeNseRamon campaign and advocates for human rights and freedom of expression in Equatorial Guinea will visit campus to talk about their experiences.

Burrill commented, “we are so pleased to have Ramón here to share The Art of Resistance with the campus community. It was great to see so many students attend the opening reception. We are excited to welcome other guest speakers as part of the exhibition programming this fall.”

The exhibition will be on display in the FedEx Global Education Center through December 13, 2019.

This exhibition is hosted by UNC Global and is organized by the African Studies Center and Global Relations in collaboration with EG Justice. Additional support is provided by the following UNC-Chapel Hill units: the Center for European Studies; the College of Arts and Sciences; the Curriculum in Global Studies; Humanities for the Public Good Initiative; and the Institute for the Arts and Humanities.