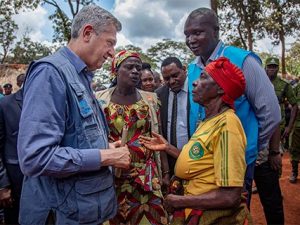 Filippo Grandi, United Nations High Commissioner for Refugees, will be the featured guest in a conversation focusing on the global refugee crisis on Thursday, September 19, 2019, at Memorial Hall at the University of North Carolina at Chapel Hill at 7 p.m.

The event is hosted by the Duke-UNC Rotary Peace Center and UNC-Chapel Hill’s global and areas studies centers. UNHCR, the UN’s refugee agency, is charged with providing aid to refugees and displaced people around the world.

“The Rotary Peace Center is delighted to welcome the UN High Commissioner for Refugees to UNC-Chapel Hill’s campus,” said Susan Carroll, managing director of the Duke-UNC Rotary Peace Center. Carroll will deliver welcoming remarks. “The number of refugees and internally displaced people worldwide is now over 70 million, the highest number ever recorded. We look forward to hearing Mr. Grandi outline the situation and discuss the actions that can be taken by the international community to tackle it. I expect this evening will be an important learning experience for students, faculty and the broader community in the Triangle.”

The conversation with Grandi will be moderated by Susan Stigant ’05 M.A., director of Africa Programs at the United States Institute of Peace. The conversation is expected to provide an overview of the global crisis and investigate the various causes around the world that are driving displacement. Following the armchair conversation, there will be a moderated Q&A with the audience.

Holding this position since 2016, Grandi is the 11th United Nations High Commissioner for Refugees. Prior to his current role, Grandi served as Commissioner-General of UNRWA, the UN Agency for Palestine refugees and previously served as Deputy Special Representative of the UN Secretary-General in Afghanistan. He also sits on the World Economic Forum High-Level Group on Humanitarian Investing.

Grandi’s life’s work has focused on advancing awareness of circumstances for refugees. He began his career in the UNHCR office in 1988 and has served in a variety of capacities in that office and throughout the United Nations since then. He holds degrees in modern history from the State University in Milan and in philosophy from the Gregorian University in Rome. He also received an honorary doctorate from the University of Coventry.

Stigant ’05 M.A was a Rotary Peace Fellow at Duke University and UNC-Chapel Hill, where she earned a master’s degree in political science.

Admission is free and open to the public. Please reserve tickets in advance through Carolina Performing Arts.