To publicize an event sponsored by a UNC department or unit with UNC Global, submit an event brief to uncglobalevents@unc.edu two to three weeks prior to the event.

For information about reserving a room in the FedEx Global Education Center and building policies, visit room requests and policies.

For guidance on welcoming international delegations to the University, please visit our page on protocol for international visits.

Include all applicable information in promotional material for an event: 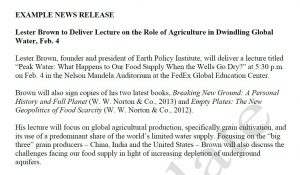 The documentary “Without A Fight” (2012, 60 min.) will be shown at 5:30 p.m. on Monday, Nov. 2, in the Nelson Mandela Auditorium in the FedEx Global Education Center at the University of North Carolina at Chapel Hill. The film provides a glimpse into an Africa few have seen. It attempts to break stereotypes associated with people who live in extreme poverty while depicting sports as a tool that could be used to prevent violence among at-risk youth. Screenings are free, open to the public, and followed by a facilitated discussion. More information is available on the Duke-UNC Rotary Peace Center website.

Jack F. Matlock Jr., former U.S. ambassador to the Soviet Union and to Czechoslovakia, will deliver remarks on “From Gorbachev to Putin: Russia and the U.S. in the Post-Cold War World” at 5:30 p.m. on Thursday, Nov. 13, in the Pleasants Family Assembly Room in the Louis Round Wilson Library at the University of North Carolina at Chapel Hill. Following his remarks, Ambassador Matlock will participate in a roundtable discussion, which will include UNC faculty members Donald Raleigh, Jay Richard Judson Distinguished Professor of History, and Klaus Larres, Richard M. Krasno Distinguished Professor of History. Ambassador Matlock’s visit to UNC is in conjunction with the Ambassadors Forum. More details are available on the UNC Global website.

Scholars from UNC and partner universities in China will participate in the symposium “Who Decides in China’s Rapid Urbanization? An Interdisciplinary Inquiry into the New Chinese City” from 12-7 p.m. on Friday, Sept. 25, at the FedEx Global Education Center, 301 Pittsboro St., Chapel Hill. Presenters will address topics including marginal urban residents, culture and the city, places of employment and urbanization. The symposium is organized by the Carolina Asia Center and is free and open to the public. Lunch and dinner will be provided. For more information, visit the Carolina Asia Center website.