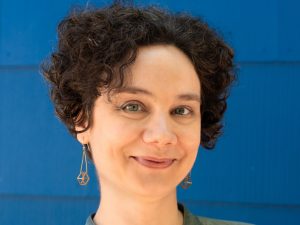 Ana Vinea, assistant professor in the Department of Asian and Middle Eastern Studies, describes herself as “a cultural anthropologist of the Middle East with general research and teaching interests in medicine, occult practices and popular culture.” In this excerpt below from her long-form essay, she explores themes of language, illness, method and structural violence, connecting her own research in the field of medical anthropology to the overlapping crises of COVID-19 and struggles against white supremacy.

More than 40 years ago, in 1978, Susan Sontag wrote Illness as Metaphor, a beautiful reflection on language and illness under the shadow of her own breast cancer diagnosis. In that essay, she is concerned with how metaphors come to cling to illnesses in ways that moralize and discriminate sufferers, as well as thwart scientific understanding. Hers is a call for a kind of purification of illness, a stripping away of metaphoric thinking in favor of the material body, the literal illness. This is an important call insofar as it fights the prejudice that accompanies some diseases, including COVID-19. Yet, it is a call that most medical anthropologists would question, based as it is on the assumption that diseases and their causes are confined to the body and can be fully comprehended by science only, stripped of history, culture and society. COVID-19 demonstrates the fallacy of this assumption by exposing the bodily impact of entrenched systemic and institutional racism. It also does that through the divergent trajectories of the pandemic in different countries, trajectories shaped by social and political factors, as much as by biological ones.

This caveat aside, what Susan Sontag does so masterfully is to draw our attention to the language we use to talk about disease. And I start with her work because ever since COVID-19 transformed our lives in March, I’ve been fascinated with the language surrounding the virus and with what that language does – how it shapes our understandings of the pandemic and how it allows us to see certain things and blinds us to others.

Military terminology abounds: medical staff is at the “frontline,” “battling”/”fighting” an “invisible enemy.” States “at war” with the virus take, or should take, “mass mobilization measures.” The virus, a submicroscopic biological organism without consciousness has gained nationality, for some it is a “Chinese virus” – a deeply racist metaphor of precisely the type Susan Sontag warned against. Other metaphors are more moralistic: SARS-CoV-2 is “mother nature’s revenge” for our continuous mistreatment of the planet, a “pause” during which “the earth needs to heal.” Healthcare and occasionally other essential workers like grocery, farm, meat or cleaning workers are described as “heroes” or “superheroes,” military and pop culture figures at once. Occasionally other actors also become super/heroes like researchers at UNC or other scientists working on the novel coronavirus. The virus to which no one is immune is a “great equalizer,” hence “we are all in this together” when confronting it.

The widespread, and global, use of combat metaphors should not come as a surprise. War language has long been used in biomedical texts and popular media to talk about the immune system, AIDS or cancer, as well as about other equally non-military matters: drugs, poverty, crime. And, of course, it has been employed in relation to past epidemics. There is something ostensibly compelling about this language – it creates a sense of urgency that appears to fit the moment. Yet it remains a problematic language. If we are at war, does this mean that we are all potential soldiers now? Should the exigency of war on the virus allow for authoritarian measures in lieu of public health policies? Labeling the virus as the “enemy” and giving it a nationality enforces the stigmatization of Asian-American communities, helping it spread alongside the virus, in similar insidious ways. The language of war enshrines violence and destruction at the center of medicine and healthcare. Such combat metaphors do not only shape how we see the pandemic, but also reflect the society confronted with it, something that medical anthropologists like Emily Martin, who has analyzed the imagery of the immune system as a nation at war, have long observed. The ease with which we have recourse to this language speaks of the pervasive militarization of American society, as it speaks of the way we tend to think of solutions to our problems in mostly aggressive ways involving attacks, enemies or sacrifices. Of course, as a medical anthropologist who sees all diseases as culturally and socially embedded, I do not think that there is a neutral, non-metaphoric language to talk about disease, including COVID-19. The question is what are the metaphors that can help us think about and deal with the pandemic in ways that are more conducive to social justice, community building, free access to healthcare and global solidarity. Can we find a way to cure without waging war? And I have to say that demilitarizing our language is not an easy task – many times while writing these lines I have caught myself wanting to use combat metaphors! Several voices in the past months have similarly underscored the necessity of this double task of critique and recreation of our COVID-19 metaphors. Readers can read examples, such as stories from Public Radio International’s The World, Grist and The Atlantic, among others.

The explosion of the language of “super/heroes” of the “fight” against COVID-19 is another instance of the war language that is simultaneously compelling and problematic. It recognizes and valorizes the tremendous, and relentless, efforts of medical staff (from physicians to nurses to researchers) to understand and combat the SARS-CoV-2 pandemic, and to care for patients with COVID-19. Yet, what does it mean to call medical personnel heroes while at the same time failing to provide them with the necessary PPE (personal protective equipment) to keep them safe and with the necessary medical devices (ventilators, beds) they need to treat patients? Is the widespread use of this language a way to gloss over the failures and vulnerabilities of a market-based health system where hospitals are primed to compete not collaborate and where elective and specialty care is more lucrative than public health, or is this language a way to highlight the work of the medical staff despite these structural constraints? Are these medical specialists heroes or victims? It is interesting to see the kind of push back that the language of heroism has received, especially when originating from the heroes themselves. Similar to Dr. Rieux in Albert Camus’ The Plague, some medical professionals have rejected the rhetoric of sacrifice and heroism or expressed ambivalence toward it. They noted that they are just “doing their jobs” as “professionals” trained to face risks in their work. Some have argued that this language does not make space, even silences, their much more nuanced experiences and emotions of dealing with the new coronavirus that range from anger and frustration to fear for themselves and their families.

Heroes, especially superheroes, are not only war figures. They are also central in popular culture. Putting aside any unease with the language of war, the image of the doctor/nurse as superhero has been artistically generative. Urban walls across the world have been embellished with coronavirus-themes murals that prominently feature health workers as heroes – they wear the “S” superman logo on their chest or face mask, adopt combative stances, wear boxing gloves or flex their biceps, occasionally punching the virus in the face. In other representations, or combined with the hero imagery, health workers exhibit religious features – they are surrounded by saintly halos or they spot angel wings. These images marry religion and science in a pop culture imagery of the “fight” against COVID-19 (the war metaphor seems apt here!).

In the U.S., images in the same genre have celebrated Dr. Anthony Fauci, the head of the National Institute of Allergy and Infectious Diseases and a member of the now defunct White House coronavirus task force. The celebration of medical staff also took other forms besides murals. Front lawns have switched elections signs that dominated in February to new ones thanking frontline health workers or marking a house as inhabited by “heroes.” In some European countries, beginning first with Italy, people have instituted what could be called rituals of gratitude, daily clapping to honor health professionals’ work that also serve as community-making rituals, forging social connection between isolated household in a kind of acoustic public sphere.

Continue reading on the Department of Asian and Middle Eastern Studies’ website.