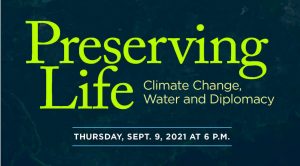 The American Academy of Diplomacy (AAD), in collaboration with the Office of the Vice Provost for Global Affairs at the University of North Carolina at Chapel Hill, will host its annual Joseph J. Sisco Memorial Forum in person in the Nelson Mandela Auditorium on Carolina’s campus at 6 p.m. EDT on Sept. 9, 2021. The event will also be livestreamed via Zoom.

The evening will feature a keynote by Ambassador Catherine Novelli, senior advisor at Shearwater Global and president of Listening for America. Novelli’s former leadership roles include under secretary of state for economic growth, energy and the environment; assistant U.S. trade representative; and vice president for worldwide government affairs at Apple. Ambassador Ronald Neumann, president of the AAD and former U.S. ambassador to Algeria, Bahrain and Afghanistan, and Ambassador Barbara Stephenson, vice provost for global affairs at UNC-Chapel Hill, will provide a joint welcome.

In explaining the importance of the topic, American Academy of Diplomacy President Ambassador Ronald Neumann commented, “Massive transnational problems need international cooperation to solve, and diplomacy is the link between U.S. policy and effective action by states.”

“I am so pleased, as part of UNC’s partnership with the Academy and our new Diplomacy Initiative, to be able to host this exploration of the role of diplomacy in protecting the environment and forging consensus on collective global action on climate change,” Stephenson said. “This is an exciting opportunity for the Carolina community to grapple with these vital issues with speakers who shaped the diplomatic discussions.”

This collaboration between Carolina and AAD is a testament to the power of diplomacy and the value of international collaboration—particularly for such a pressing global concern as climate change.

The forum will take place in person at the Nelson Mandela Auditorium in the FedEx Global Education Center. To attend in person, please register in advance.

The event will also be live-streamed and recorded via Zoom. Please register in advance to receive a Zoom link.

The forum is part of a larger partnership between UNC-Chapel Hill and AAD, which includes collaboration on the production of the podcast series The General and the Ambassador, as well as programming that enriches the University’s new Diplomacy Initiative.

The Academy is an independent, non-profit association of over 300 former senior U.S. ambassadors and high-level government officials who have served with distinction in international affairs. The Academy’s mission is to strengthen American diplomacy through outreach programs, awards, podcasts, research and public discussions, like the Joseph J. Sisco Memorial Forum.

This programming is organized by the AAD and the Office of the Vice Provost for Global Affairs at UNC-Chapel Hill. This event is presented with generous support from the Sisco Family Charitable Fund.