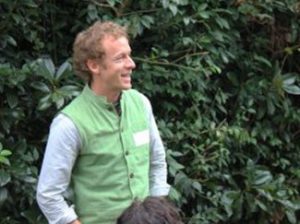 Townsend Middleton is an associate professor of anthropology at The University of North Carolina at Chapel Hill. As a sociocultural anthropologist, he specializes in the political cultures of India. His work focuses broadly on questions of the state, power, politics and post/coloniality—themes he explores through various combinations of ethnographic and historical techniques.

Middleton is a founding member of the National Science Foundation-supported Chokepoints Collective—an interdisciplinary group of ethnographers studying sites that constrict or ‘choke’ the flows of people, resources and information upon which contemporary life depends.

For more information about Middleton, see his page on the Department of Anthropology website.

Transcript from the video, Conversations at Hickerson House: Townsend Middleton on Chokepoints – A Comparative Global Ethnography:

Tell us about your ongoing research.

For the past four years I’ve been part of a collaborative research project, supported by the National Science Foundation, that’s looking at chokepoints around the world. So, what’s a chokepoint you might ask? Well, a chokepoint is a site that constricts or chokes the flow of say – information, bodies, materials – upon which the world depends. Classic examples of chokepoints would be canals, tunnels, ports are chokepoints. So, we became very interested in these sites because the world is very interesting these sites. They are often the sites of the most vulnerability to world networks and also the most vitality. Obviously, militaries have been very concerned about chokepoints for hundreds of years.

As the logistics revolution has revolutionized how goods get around the world, logistics has become very concerned about what to do about chokepoints. There are huge problems. They slow things down. Whatever happens in the chokepoint often has ripple effects that ripple long beyond the point of passage itself.

We were looking at all these discussions about chokepoints that are out there in the news and in various discourses and we wanted to know what life looked like in these sites. What we essentially did was, we gathered a group of ethnographers from five different institutions: myself; Gaby Valdivia, who’s here at UNC; we have someone that works at Indiana University – Elizabeth Dunn; Ashley Carse is at Vanderbilt; Jason Cons is at Texas; and Justin Dua is at Michigan. And we decided we would all kind of fan out and go study particular chokepoints around the world with a real emphasis on trying to understand what life looked like in these transit zones. One of the things we found is that, because these sites are so vital and vulnerable, they’re often very much overdetermined from without, but they’re also intensely local sites, such that whatever happens in these narrow, constricted passages often really affects life well beyond them. We are very interested in how people navigate these sites. How they live in these sites. How they work them to both legal and illegal ends. What we essentially did was we all spread out and did several months of research each and then over the next year or two we convened various workshops and talked about our findings and started to write up our findings and individual papers and various collections.

The project has been quite interesting insofar as it’s involved those expansions and moments of contraction as well. One of the things that we found is, once we started thinking chokepoints, we started seeing them everywhere and we found that the concept itself was very charismatic. We decided, what if we put the concept out as a provocation to a bunch of different types of scholars? So we paired up with an online magazine called Limn, Limn.it,  who does a lot of work at the interface between art and the social sciences and humanities, and we asked people to give us short articles on chokepoints, whatever that meant to them. We had 18 different articles that came back, and it was really a wonderful moment of expansion because we got to learn so much in editing this project and preparing the special issue of this magazine. It really helped us rethink how we were engaging chokepoints, and since then we’ve had a moment of contraction where we’ve gone back to the original six members of the team and really kind of dove in a little bit deeper to think about what would a real ethnographic approach to chokepoints look like and how can we affect the broader discourses of chokepoints that are out there in the world.

What has been most surprising about what you’ve found so far?

I think one of the things that’s most surprising about what we found is that while these sites are often overdetermined or overcoded by these broad global forces, there’s a lot of room for maneuver within the sites themselves. I, for instance, have been working at a particular chokepoint in India called the Siliguri corridor, which has the very apt nickname – it’s called the chicken neck – and it’s a site where India, which is obviously a rather large country, narrows down to only 20 miles across. And so all sorts of stuff are passing through this corridor, including all sorts of contraband – human trafficking uses this corridor, militants use this corridor. And as I was engaging with this this space ethnographically, I came to realize that despite the huge military and police presence there was all sorts of untoward things going on under the radar. And that if you asked locals, they actually felt like it was the Mafias that ran the space more so then then the military and the police – that obviously have both built up their presence there. So, just in those findings, for me, resonated across the various sites we were looking at, where you constantly saw the formal mechanisms of getting stuff through and then you saw the informal mechanisms of getting stuff through. So, I became very interesting in what was going on out of sites and how people were both getting through this site but also getting by and making these sites work to a variety of different ends.

What do you hope to learn in the next stage of this research?

The next stage of the research, like I said earlier, we had this moment of kind of expansion where we had all these different kinds of scholars weighing in on what a chokepoint is, and how they work and what it could be. And then since then we’ve really tried to focus in on the kind of anthropology or ethnography of chokepoints. So, for this next stage we’ve prepared a collection of essays that we’re hoping will start to really impact the way anthropologist approach chokepoints. What I’m hoping is that anthropologists and ethnographers, writ large, start to see chokepoints in a variety of different forms that are out there and that maybe we have kicked off a conversation about what an anthropological choke point might be.

What are your next steps of this research?

The next steps – the project was originally designed to be kind of a short-term project involving about a year of research and then a year of writing up and sharing our findings and it’s since gone… we’re now in year four as these things often do! They kind of grow beyond their original plans, but one of things I’ve been most excited about – I still have some lingering interest in the Siliguri corridor so I probably plan to do a little bit more research over the coming years. One of things that I found very interesting is essentially these conversations that this project has engendered have seeded a variety of other projects, so we have lots of people that are taking our original provocation and making them grow into other research projects. I’m thinking in particular about an anthropologist named Vincent Joos, who is it Florida State, and he paired with a photojournalist and they were working at Calais by the edge of the Chunnel with all the refugee migrants that were settled there. And now they’re taking this project many steps down the road and they’ve got a long-term ongoing project combining ethnography and photojournalism. And I think that holds for many of the projects. So, it’s really become kind of a point of growth in a lot of different directions, which we’re really excited about.