Exploring the World through Popular Music 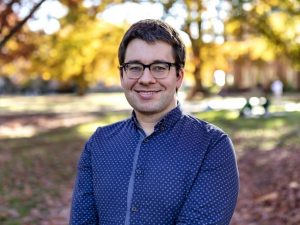 Maximilian Spiegel ‘21 Ph.D. will graduate in December 2021 and plans to pursue a career in academia based on his interdisciplinary study of popular music.

In 2014, Maximilian Spiegel began his graduate studies as an international student at UNC-Chapel Hill. Seven years later — following interdisciplinary study of popular music in the United States, a marriage, and becoming a parent — Spiegel will graduate in December with a Ph.D. prepared to shape interdisciplinary conversation in his field and beyond.

As a graduate student in the College of Art & Sciences’ Department of Communication and as a fellow with The Graduate School’s Royster Society of Fellows, Spiegel has explored music as a mode of cultural expression with a particular interest in collective experimentation.

He spent eight semesters as a graduate instructor teaching an undergraduate course in popular music — an entry point to foster critical thinking and providing him valuable experience for the academic job market.

“For me, in many ways, it’s about students being able to bring in music they’re passionate about that’s really important to them — songs, artists, ways of listening — and providing them with a different set of tools to explore that,” Spiegel said. “It’s about working together to explore tools.”

Those tools in practice can be applied to resistant subcultures and music scenes of recent decades—from punk to hip-hop, for example. Here, music serves as an outlet for many, allowing them to explore their identities, political issues, and other emerging cultural and societal issues.

“Music is an entry point to much larger questions,” Spiegel said. “Music lends itself as a realm of inquiry because popular music has been a field where people have been able to try out new things and have experimented before.”

Prior to pursuing graduate education at Carolina, he studied political science and history in his native Austria. He found an interest in U.S. popular culture as it had a large impact in Europe during the second half of the 20th century. He began to follow the works of Lawrence Grossberg, co-director of the University Program in Cultural Studies at Carolina, who would eventually become his dissertation advisor.

As an international student, Spiegel’s knowledge of popular culture cushioned his transition and lessened the shock he might have otherwise felt.

“If you immerse yourself in the music of this area already, then you pick up on certain things that are important and relevant to life here in the U.S.,” Spiegel said.

Spiegel said the five-year Royster fellowship, which funds doctoral students and encourages interdisciplinary study, also made his transition to the United States easier.

“There were a variety of projects that became important to me. It was exciting to not only be able to encounter that work, but to also tell the world about it.”

Spiegel’s varied interests made him a perfect candidate for the fellowship program, which serves to fund doctoral students and to build community.

Spiegel and four other fellows who will graduate this semester will bring the number of Royster alumni to 600 — a testament to the University’s longstanding commitment to graduate students like Spiegel.

As he prepares for graduation, Spiegel looks forward to a career in academia and is working to pursue his next step. His interdisciplinary studies have afforded him the opportunity to continue to explore avenues for interdisciplinary work, be it in communication, sociology or music, all in an effort to prepare the next generation of leaders.

“I think it’s crucial for any good scholarship to do that.”