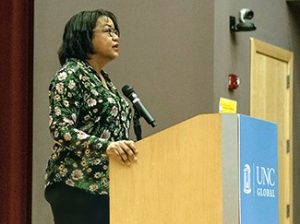 The Center for Global Initiatives (CGI) at the University of North Carolina at Chapel Hill hosted UNC-Chapel Hill alumna Helene Cooper ’87 for CGI’s 25th anniversary celebration on Monday, February 25, 2019. Cooper presented her lecture, “Gathering Global Stories,” illustrating how her time at Carolina affected her global career as a journalist and author.

Niklaus Steiner, director of the Center for Global Initiatives, provided opening remarks. Steiner welcomed Helene Cooper back to the University––which they had both attended together in the 1980’s––and explained CGI’s opening-access initiative, a pan-university effort to make global opportunities available for all students. Bob Blouin, executive vice chancellor and provost, emphasized that CGI has made 2,500 global awards, and sent faculty and students to more than 130 countries over the past 25 years. Blouin introduced Cooper, tracing her trajectory from her childhood in Liberia, to her resettlement in Greensboro, North Carolina, then to her academic career at the UNC School of Media and Journalism.

Cooper is a Pentagon correspondent for The New York Times, where she covers international economics, trade, foreign policy, race and politics. She has reported from 64 countries, and in 2015 she was part of a team that won the Pulitzer Prize for their work reporting on the Ebola epidemic in West Africa. In addition to her work as a journalist, Cooper is the author of The House at Sugar Beach: In Search of a Lost African Childhood, which was nominated for a National Book Critics Circle Award for Autobiography, and Madame President: The Extraordinary Story of Ellen Johnson Sirleaf.

Cooper began her lecture by reflecting on the value of a global perspective, noting that she went into journalism out of a longing to gain an understanding of history, politics and cultural influences of current events. After recounting vivid childhood memories of the Liberian coup on April 12, 1980, Cooper revealed that her interest in journalism stemmed from a resolve to become more aware of her surroundings, so that she was “never surprised like that again.”

Cooper said that the benefit of traveling and seeking stories is that it “reminds us of how much we have in common.” This was evident as she described her award-winning work covering the Ebola crisis, in which she came to realize that people commonly contracted Ebola through touching and comforting their loved ones. Ending on this note of empathy and connection, Cooper concluded her talk by emphasizing the enriching process of collecting stories, and encouraged the audience to “get out there and collect your own.”

Raymond Farrow, associate provost for global affairs and interim chief global officer, was instrumental in bringing Cooper to campus. Farrow noted that he has seen tremendous growth in Carolina’s global presence in the twenty-plus years that he has worked for the University. “The Center for Global Initiatives is a key part of the next stage of growth for Carolina’s global work,” he said. “CGI is finding innovative ways to open opportunities to more students. And I’m thrilled that Helene Cooper was a part of celebrating its milestone anniversary. She is an inspiration to UNC students and the community.”

Following Cooper’s lecture, Steiner moderated a question and answer session. A reception followed in the Florence and James Peacock Atrium of the FedEx Global Education Center.

The event was sponsored by the Center for Global Initiatives, with support from the Chancellor’s Global Education Fund.