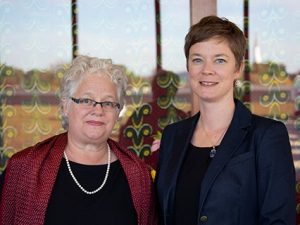 Barbara Anderson, left, and Emily Burrill, associate professor in the departments of history and women's and gender studies and director of the African Studies Center, right

The African Studies Center at the University of North Carolina-Chapel Hill has established the Barbara Anderson Travel Award in honor of its founding associate director.

Barbara Anderson, who spent the past 13 years as associate director of the African Studies Center, retired in late fall 2018. The new travel awards are intended to honor Anderson’s service to the center and her longstanding commitment to students pursuing international education. In addition to shaping the programming of the center, Anderson had a leading role in advancing the center through four successful application cycles for Title VI funding. The achievement of these federal funds established the African Studies Center as a National Resource Center. As of 2017, the center was one of eleven National Resources dedicated to African studies.

Anderson was recognized as a successful educator during her 34 years at the University. She served as an adjunct lecturer in the African, African American, and Diaspora Studies department and has led students at both the K-12 and college levels on study abroad trips. Anderson served as a mentor for the Carolina Covenant, which allows qualified students from low-income backgrounds to graduate debt free. She was also a leader in the area studies centers’ open access initiative, which seeks to expand global opportunities for underrepresented students.

The Barbara Anderson Travel Award, which will be awarded annually, will support a Carolina undergraduate student’s study abroad to an African country. In keeping with Anderson’s dedication to expanding educational opportunities, strong preference will be given to first generation students and students from underrepresented communities.