The Triple Trauma of Refugees 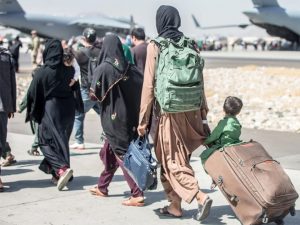 Afghan refugees are coming to the Triangle, and the University of North Carolina at Chapel Hill’s School of Social Work is ready to help them.

Durham and Raleigh are among the cities that the State Department chose for resettlement of the refugees, which will happen as they move through the immigration process during the next few months. Department of Homeland Security figures put the total of Afghans who will settle in the United States over the next year at 50,000.

Josh Hinson, a clinical assistant professor in the UNC School of Social Work, developed the UNC Refugee Mental Health and Wellness Initiative because master’s degree students asked for training in providing mental health services to refugees. Through the initiative, Hinson and program coordinator Marlowe Crews Kovach, along with graduate students, offer individual and group therapy and coordinate with local health care providers on care of refugees they serve. They also identify mental and behavioral health needs of clients and look locally for services to help. Additionally, they train local providers on how to identify refugee distress and help refugees understand how and why to seek mental health services.

Hinson’s experience includes work with resettlement organizations, health and mental health providers and local, state and federal agencies to serve the Triangle’s refugees through an integrated system of care. He teaches courses on migration, immigration and citizenship law and policy, and working with refugee survivors of torture and trauma.

The Well talked with Hinson about what the Afghan refugees are experiencing:

What have the Afghan refugees gone through, and what’s ahead for them?

There’s a shared experience among refugees, and it is fundamental to the way that the Refugee Mental Health and Wellness Initiative approaches refugee mental health. We call it a triple trauma paradigm. That refers to how folks who come to the United States as refugees experienced trauma in their countries of origin. That’s part of the definition of a refugee.

Secondly, they fled their homes because of a well-founded fear of persecution and that’s traumatic. It’s trauma of flight. That’s the story of people we’ve seen in the news — those crowding the Kabul airport trying to get away, people on boats in the Mediterranean or people seeking asylum at the U.S.-Mexico border. Those are traumatic experiences.

Then there is trauma in the host country. It happens after resettlement when people have so many emotions. They may feel some relief. They may feel guilt about having survived but left friends and family members behind.

They quickly have to become self-sufficient within three to six months. Those with refugee status and those with humanitarian parole status are expected to be employed and paying their rent and to be self-sufficient. There’s acculturation stress. And the xenophobia and the anti-immigrant and anti-Muslim and anti-refugee attitudes that people experience is traumatic. People need to understand that the trauma doesn’t start once people flee their homes and end there. It is continuous. Refugees often need support for years.

How do you and the initiative’s counselors make contact with refugees?

Resettlement agencies, our primary referral source, get a call from the Federal Office of Refugee Settlement, saying, “Expect a family in the next 24 or 48 hours. Send someone to pick them up at the airport. Have an apartment ready for them, and it needs to have these things in it.”

We aren’t involved in that process, but we often receive referrals from the resettlement agency saying, “Someone has arrived and they’re having a hard time. We think they could use additional support.” Then we contact the person and offer mental health screening and then offer assessment.

We also receive referrals from health care providers and sometimes from schools and social services departments. We primarily work with adults but are beginning to work with youth. Occasionally we’ll get referrals from clients that we’re already working with. They’re concerned about a neighbor who they think could benefit from our services.

At any given time, how many folks are you working with?

We typically receive about 100 new referrals per year. We are contracted by the State Refugee Office, which is part of the North Carolina Department of Health and Human Services, to serve refugees in North Carolina. We have one full-time staff person who is a licensed clinical social worker and five to eight graduate students who spend the academic year doing an internship with me. So our capacity is so limited.

What’s important for us to know about the Afghan refugees?

Many of the people coming from Afghanistan assisted the U.S. military and served alongside U.S. servicemen. They put their lives and their families’ lives on the line for our military. When we talk about trauma after arrival, they feel like they’ve been deserted after they get here because they are told: “You’re on your own.” I don’t want to say that in a way that feels castigating and shaming, but it speaks to the level of support that people need. They deserve the same commitment that they gave to us and that we need to return to them.

They are just one of many refugee populations. There are Syrian refugees, Iraqi refugees, refugees from Burma and refugees from the Democratic Republic of Congo, among many others. All of them have experienced trauma and need support.

How can we help?

Supporting the resettlement agencies that do this work, day after day, year after year is so important because they address people’s basic needs.

Some agencies like the Refugee Community Partnership in Carrboro take volunteers. You can be matched with a family and meet with them on a weekly basis, help them read their mail, navigate health care systems and coach them to advocate for their kids in the school system.

Working with refugees, getting to know them and their families, hearing their stories … it’s made me feel patriotic. Refugees want to start a new life. They want their children to succeed here. Refugees believe in the American dream, and they need our help to make those dreams come true.

The Refugee Support Center in Carrboro supports refugees from many countries, and the agencies affiliated with the Department of State’s Afghan resettlement efforts are World Relief, Church World Service, the U.S. Committee for Refugees and Immigrants and Lutheran Services Carolinas.