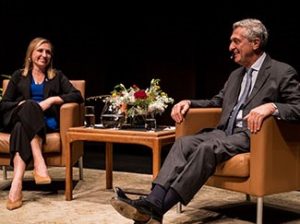 The U.N. High Commissioner for Refugees Filippo Grandi delivered his first public remarks at a U.S. university on Sept. 19 at the University of North Carolina at Chapel Hill.

Grandi sat down with UNC-Chapel Hill alumna and Director of Africa Programs at the U.S. Institute of Peace Susan Stigant ’05 M.A. in Memorial Hall for a conversation on the global refugee crisis and his personal journey as a humanitarian worker. They were introduced by Susan Carroll, managing director of the Duke-UNC Rotary Peace Center.

He discussed how his first trip as a volunteer humanitarian worker on the Thai-Myanmar border assisting refugees solidified his commitment to humanitarian aid work, and he discussed his first posting with the UNHCR office to Sudan. Grandi has been involved with the office since 1988.

This conversation between Stigant and Grandi was timely; it is estimated that there are over 70 million people displaced worldwide.

Grandi highlighted the importance of understanding that with refugee flows, the vast majority become displaced within their home country or flee to neighboring countries. He said these areas are where the most critical assistance is needed for refugees.

Grandi said what concerns him about the current refugee crisis is the lack of ability for peace to be made in the global conflicts that are causing refugee flows to continue.

He also reiterated the need to integrate refugees into the societies in which they arrive, rather than keep them in refugee camps. He said this means sending children to school and making sure sick people have access to medical treatment.

Additionally, Grandi touched on the multiple responsibilities he sees himself having as UNHCR. These include giving people who find themselves as refugees dignity in traumatic times and providing them with security that their states are unable to provide.

Grandi said that, most importantly, he must understand the political environment of the situations his organization works in, while not allowing those politics to dictate work that must put people first.

Grandi is the 11th U.N. High Commissioner for Refugees. He previously served as Commissioner-General of UNRWA, which is the U.N. Agency for Palestinian refugees and also served as Deputy Special Representative of the U.N. Secretary-General in Afghanistan. He also sits on the World Economic Forum High-Level Group on Humanitarian Investing.

Stigant ’05 M.A. was a Rotary Peace Fellow at Duke University and UNC-Chapel Hill, where she earned a master’s degree in political science.