Home / News Stories / Bringing Peace and Healing to His Country

Bringing Peace and Healing to His Country 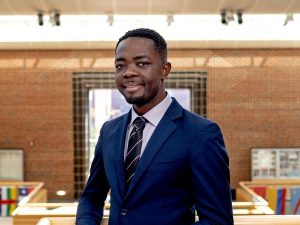 Duke-UNC Rotary Peace Center Fellow Dr. Mexan Mapouka is fulfilling his calling to heal others by bringing what he’s learned back to his hometown in the Central African Republic.

Dr. Mexan Mapouka once worked to heal others as a young doctor in a war zone. Now, he’s pursuing a master’s in public health at UNC Gillings School of Global Public Health as a fellow at the Duke-UNC Rotary Peace Center to learn how to combine his medical knowledge with conflict resolution.

The Duke-UNC Rotary Peace Center fellowship program combines conflict resolution methods, peacebuilding and conflict prevention with an emphasis on more sustainable economic, political and human development. Fellows are chosen internationally for their potential to positively impact the world in their future careers.

“This is a tremendous program that gives people who can’t afford to continue their graduate education a chance to do so,” Mapouka says. “It also trains the next generation of people who will take the lead in places like the Central African Republic where peacebuilding is needed.”

He learned about the program when he was living in Atlanta, working in the epidemiology and surveillance branch of the Centers for Disease Control and Prevention on population-based HIV impact assessment and COVID-19 vaccine clinical trials. The fellowship was perfectly suited to someone like Mapouka, who is already helping others but wants to do more.

Caring for the people of the Central African Republic

Mapouka was born in the small Central African Republic town of Bossembele and lost his mother when he was 4 years old to preventable complications in the hospital. Then, in 2012, his country was plunged into a civil war that has killed, injured and traumatized thousands.

When Mapouka faced a crossroads in deciding what career he wanted to pursue, his father reminded him that his mother’s death was caused by a lack of trained medical professionals in their area, and Mapouka decided to dedicate his life to helping people like his mother and his fellow citizens who were displaced by raging civil war.

After graduating from medical school, Mapouka worked as a physician specialist in HIV and tuberculosis with Belgium Doctors Without Borders and treated internal refugees fleeing the armed conflict. Two years after that, he joined the International Committee of the Red Cross and provided health care to wounded patients of the ongoing civil war.

“Living and working in a conflict zone allowed me to understand the daily challenges that refugee populations face and how I can increase their overall well-being,” Mapouka says. “The challenges I witnessed in the Central African Republic were mental health issues, barriers to education and less economic opportunity.”

When Mapouka arrived at Carolina in 2021 to join the Duke-UNC Rotary Peace Center, he knew he wanted to continue serving his people even when he was thousands of miles away.

“I continue to work with my colleagues back home while I’m pursuing my master’s degree in public health,” Mapouka says. “I have a personal project that I’m working on to provide health care training to nurses, midwives and community workers to respond to medical emergencies in the context of a post-conflict situation in Bossembele, the city where I was born. Resources like that are needed badly and could save many lives.”

Mapouka is also researching COVID-19 vaccination status among the immigrants and refugee populations for the Gillings Humanitarian Health Initiative, volunteers with Carrboro’s Refugee Community Partnership and collects COVID-19 data for the North Carolina State Center for Health Statistics. But all the work he’s doing as a fellow is looking toward how he can serve his home country as a leader one day.

“The Central African Republic is a perfect example of why we need to train more people in peacebuilding, democracy and the respect of human rights,” Mapouka says. “In order to lead the way to peace, I need more experience in healthcare and leadership, which is what I’m learning as a fellow.”

After completing his fellowship through the Duke-UNC Rotary Peace Center in May, Mapouka hopes to use his expanded public health and conflict resolution skills to help heal his country.

“The importance of this fellowship is that they’re training people like me who will take what we’ve learned internationally to make a difference and change things for the better for others,” Mapouka says.